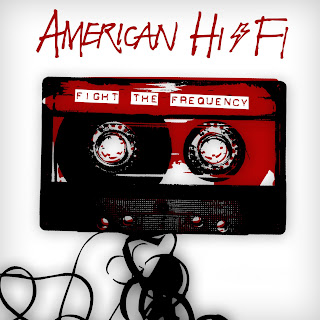 Boston rockers American Hi-Fi return with their fourth studio album, Fight The Frequency on August 17, 2010, the follow-up to 2005's Hearts On Parade. Over the past several years singer/guitarist Stacy Jones has been musical director and drummer for Miley Cyrus while Jamie Arentzen has been her guitarist. Jones has also produced albums for artists such as Meg & Dia, Ingrid Michaelson, Plain White T's and The Cab. Fight The Frequency finds the original American Hi-Fi lineup together again with a collection of twelve songs that run the gamut from Punk-Inspired modern rock to pop/rock balladry.

American Hi-Fi opens with the title track "Fight The Frequency, featuring a catchy, guitar-driven big rock chorus. It's one of those songs that get stuck in your head the first time you hear it and simply won't leave. The song is optimistic tune about going with the flow of life and letting your dreams take off. There's major single potential here. The same can be said of "This Is A Low" which is edgy pop/rock at its finest with another big catchy chorus. Sliding into the plodding anti-ballad "Where Love Is A Lie", American Hi-Fi begins a more angst-filled trend that recurs throughout much of the album. "Acetate" is a solid example, mixing the band's pop/rock sound with a bit of Nirvana-esque angst and edge. The song works and has a solid arrangement but seems a bit out of place here.

"Lost" is the first single from the album, an upbeat power ballad of sorts that's very catchy. Expect the interest from both radio and the licensing realm to be large for this tune. "Frat Clump" finds American Hi-Fi at their hardest and heaviest, playing with a punk edge that's not their best sound but a lot of fun to listen to. "Lookout For Hope" returns to a more pop-oriented sound as a mildly catchy relationship song with a solid chorus. This mild inertia holds through "A Taste For Crime" and "Stargazer" before the band breaks out with "Bullet". Personal tastes will vary around this song, but it's certain to gather a lot of interest from radio if released as a single. Perhaps the best is saved for last however. American Hi-Fi closes with "Tiny Spark", infiltrating their big rock sound with elements of Americana and southern rock. The big, open chorus and solid harmonies make this song a winner, the sort that becomes a concert favorite and sticks around the band's live set for the balance of their careers.

It's hard to say whether American Hi-Fi will be able to recreate the sort of success they've previously had with singles such as "Flavor Of The Weak", "Another Perfect Day" or "The Art Of Losing", but there are at least three songs on Fight The Frequency with the potential for big radio impact. The time off certainly hasn't dulled the band's pop proclivities or guitar muscle. American Hi-Fi has a winner on their hands with Fight The Frequency.

Learn more about American Hi-Fi at http://www.americanhi-fi.com/ or www.myspace.com/americanhifi.  Fight The Frequency drops on August 17, 2010, and can be downloaded from Amazon.com