Shelley & Cal - Something Goin' On 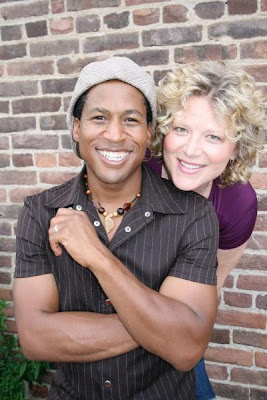 Shelley & Cal James are a Eugene, Oregon husband and wife songwriting duo who write music for the soul. Showing an ability to touch audiences live, Shelley & Cal have gained a fair amount of popularity in their home market and essentially anyplace else they perform. Shelley & Cal’s debut EP, Something Goin’ On, captures the essence of Shelley & Cal’s performing style without sacrificing too much to their live sound.

Something Goin' On opens with the title track, a catchy pop tune with a one of those choruses that echo around in your brain for hours after you first hear it. The song has a decidedly 1980's feel but enough pop power to overcome commercial radio's fear of good music. "Maybe" is a generic love ballad with an 80's feel. The vocal harmonies on the chorus make this a must-listen. "You Will Never Change" keeps the light-pop feel, a somewhat generic ballad that fits in with the Delilah demographic. Shelley & Cal close with a retrofit of "Amazing Grace", involving melodic variations and a chorus. The song is heartfelt, and the vocal harmonies are angelic.

Shelley & Cal step back a bit in time with Something Goin' On, carving out a niche for their highly melodic and easy going pop/folk style. From a sonic perspective this is a gorgeous EP, steeped in strong melodies, pretty harmonies and a fluid, lyric feel. Stylistically, Shelley & Cal would fare well with a bit more variation in sound, as the slow pace set here might not work as well over a full-length album. Nevertheless, if you have an ear for music there's a lot wrapped in Something Goin' On that you'll want to hear.

Rating: 3 Stars (Out of 5)
Learn more about Shelley & Cal and http://www.shelleyandcal.com/ or www.myspace.com/shellyandcal. No online outlets were noted for "Something's Goin' On"; contact the band through their MySpace page for availability in both CD and download versions.
Posted by Wildy at 5:00 AM

I enjoyed reading your review of Shelley & Cal's music. There actually is online availablility. It is through iTunes, Amazon, and numerous other obscure outlets. You need to spell the CD Something Goin' On, then you will find it in your searches. Or search for "Shelley & Cal" on those two music outlets and you will find them.