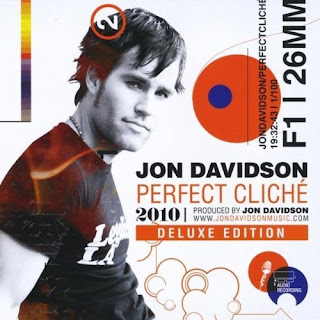 Jon Davidson - Perfect Cliché
2010, Jon Davidson MusicPortland, Oregon’s Jon Davidson is known to many as the front man for rock band Silversafe, but he’s made a fair amount of noise as a solo artist since the 2008 release of his debut album, Perfect Cliché. 2010 finds Davidson back with a remixed and re-recorded version of the album including five additional tracks. Known for his vibrant live performances, Davidson shows a dynamic musical personality that borders on dissociation.

Jon Davidson cannot decide who he wants to be. Is it glamorous pop star ala Rob Thomas; vital and angry rocker like Live or dance club king? This three-headed hydra shows itself one head at a time on Perfect Cliché, creating more confusion and cognitive dissonance than post-genre cred. Opening with "Beautifully Bittersweet", Davidson displays the disaffected anger of the current generation in an angry arrangement reminiscent of Live while maintaining the pop approach and sensibility of Rob Thomas. The muscular guitar drives this song, a likely player on the commercial stage should he decide to release it as a single. "It Won't Be Long" is a bit harder and full of jangly guitar. The pop sensibility remains, and "It Won't Be Long" is catchy and enjoyable even if it strays a bit heavily into the modern rock/alternative radio formula. "Perfect Cliché" has a great chorus although the vocals are mixed a bit too low. The song is very likeable, although the live version offered as a bonus track sounds much better.

"Sunrise" shows off Davidson's ability to write catchy little choruses with great melodies. The orientation here gets a bit too electro-pop in light of what's come before, but expands Davidson's musical palette in the direction of electronic and dance music for the first time on the album. "Hermit Crab" once again offers a great chorus, and the instrumentation works very well. The vocal line doesn't really stand out here, but the overall mix works well for pop and modern rock radio formats. "What Can I Say?" is the sort of ballad that makes hearts melt and sends teenage girls running giddy in the streets. It's offered in power ballad style but in a primarily acoustic arrangement that opens up the melody quite nicely. Davidson returns to the catchy rockers he's comfortable with on "Never A Metaphor", which manages to be very commercial without trying to be. Try getting this tune out of your head; the chorus will sing itself.

Perfect Cliché suffers a bit of a lull at the end, punctuated by the catchy and crunchy rock/pop of "Finger In The Eye". Driven by a big guitar riff and a solid chorus, "Finger In The Eye" is the class of the last half of the album. Davidson fills things out with four alternate versions of songs on the album.

Jon Davidson wants to be all things to all people on Perfect Cliché; this shizophonic approach to making music is an honorable pursuit, but the pop/dance oriented material just doesn’t work for him. When Davidson is out in front of a crunchy guitar sound and surrounded by big riffs he sounds very much like the big rock star. Unfortunately the dance material sounds like a bad joke by comparison. It’s inclusion turns a solid effort that nonetheless raises questions about his musical direction. Davidson is currently working on a new album with producer Jeff Johnson, engineer Chris Holmes (Korn) and mix-master Randy Staub (Metallica, U2, Our Lady Peace, Nickelback). I suspect some questions will be answered in that process.

from Amazon.com.  The album is also available digitally through iTunes.
Posted by Wildy at 5:00 AM