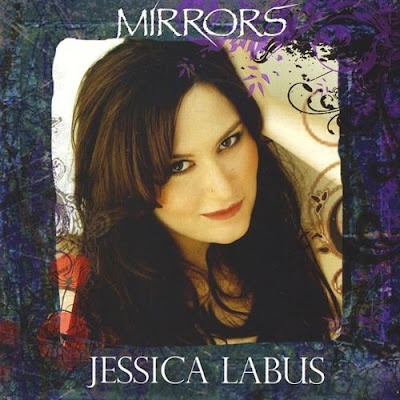 Jessica Labus - Mirrors
2009, Jessica Labus
Born in Florida but raised in Niagara Falls and Grand Island, New York, Jessica Labus had a hunger to perform from an early age. Musical theater and country/western music were her fortes in childhood, but as soon as Labus could drive she quit small town life for New York City. Playing the subways and taking classes in musical theater helped Labus establish her priorities, and soon she set out to become a singer/songwriter. With a bitingly honest songwriting style and flashes of biography based on her own life and people she knows, Labus writes meaningful musical dialogs punched with the efficacy of truth, but run through with an admirable pop/rock sensibility that's hard to ignore. Jessica Labus launched her debut album, Mirrors, in 2009.

Mirrors opens with "Bryan's Song", a tune about personal demons and addictions. It's a call to wake up and make a change before things fall apart, and was written about/to a family member who had a hard time listening to the counsel of loved ones. "Mirrors" is an urgent/angry rocker about an affair a friend had with a married man. It's written from an interesting perspective, capturing a wealth of conflicting emotions that arise from such poisoned undertakings. In "Time Spent", Labus engages in reverie over a relationship gone by;k not regretting a moment but allowing a wash of wistful melancholy to dance with the not-quite-dormant emotions the memory stirs. "With Or Without Me" looks back on a relationship that went wrong because Labus never took her partner seriously. With time and perspective as her guide she realizes she really loved him, but finds the most important thing to be his happiness.

"Anything From You" goes to the relationship well once again, this time from a more confused and hurt place; there is a moral to the story, but you'll have to listen all the way to the end to find it out. Labus pours her heart out in "Back To You"; her voice breaking with the emotion of the song in a fashion that seems natural rather than effected. It's a great tune, one of the more positive songs about love on the album. "Quarter Past Four" encompasses the misgivings that attack us in the wee hours. It's vulnerability of a personal sort that shows up in "Quarter Past Four", but it becomes a strength as Labus realizes she needs to take control of her own life even it means giving up something she adores.

"Who" takes another tack entirely. It's a biting, sarcastic kiss off song, written, by Labus' own admission, to embarrass someone who just walked out of her life. Labus' affection for country music shines through here, and you could picture "Who" becoming an anthem for those who have been wronged by men with less-than-honorable intentions. With "Meant To Be", Labus breaks down the barrier between things that are meant to be and things that are meant to last forever. It's a mature perspective that is built part out of the need of the moment and part out of our own ability to fool ourselves into believing that what we want and what we are "meant for" are one in the same. Mirrors closes with "Watching Over Me", an ode Labus' grandmother for all of the love and lessons she gave ("Now that you're slowly fading into a memory / I keep you close by believing in what I cannot see / Now I've got an angel watching over me"). It's a touching closer that will hit home with anyone who's lost a beloved parent, grandparent or parental figure.

Jessica Labus has a point blank story-telling style that is likely to intrigue you unless it hits a little close to home. Labus deals with reality as she sees it, in a no-nonsense fashion that is both refreshing and occasionally discomfiting. Every note on Mirrors is finely crafted and is full of passion and emotion; even in the quite moments Labus' voice burns with the heat of each memory and emotion. Mirrors is Labus thinking aloud in song, and you'll be glad she's welcomes you into her mind. Here there is no hedging; no pretty colors to distract or blind you; just solid, honest song-writing delivered in impassioned tones. Mirrors is a must-have album.

Learn more about Jessica Labus at www.myspace.com/jessicalabus. Mirrors is available in multiple formats from Amazon, CDBaby and iTunes.
Posted by Wildy at 5:10 AM