Karen Jacobsen - Kissing Someone Else 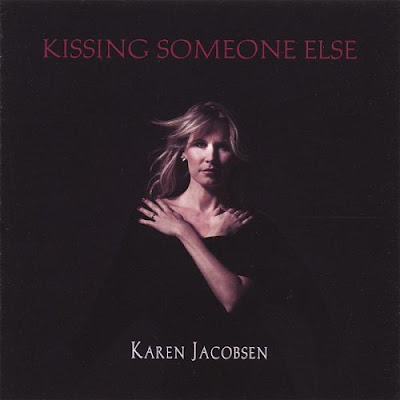 Australian-born singer/songwriter Karen Jacobsen has been based out of New York City for the past ten years now. With an airy, pretty voice, a model’s looks and a comfortable stage presence, Jacobsen has charmed crowds while sharing the stage with the likes of Norah Jones, Christopher Cross, Cyndi Lauper and Jars Of Clay. Jacobsen’s 2007 album Kissing Someone Else, is a mix of sublime and mundane moments.

Karen Jacobsen offers up a mix of affable pop songs on Kissing Someone Else. Opening with the title track, Jacobsen shows off a breathy voice that's light and sweet. Singing with honest emotion, Jacobsen charms with a tune you can't help but hum/sing along to. "So Fast" is a prospective pop love song balancing the desire to fall in love and the wariness of one who has been burned. "I Believe In This Man" is a light-pop 1980's love ballad with a mild R&B feel. Jacobsen's voice is again light and sweet, but there's a lot of intervention here from the production side to get her there. The electronic tinge in Jacobsen's voice is highly over-stated here.

"Merry Go Round" is as circular as the name implies. Although highly repetitive, Jacobsen gets points for writing a very catchy pop arrangement. Jacobsen's best moments come on "Afterthought". There are times on the album when Jacobsen's lyrics seem a bit mundane, but she's at her best here with a catchy arrangement and intelligent lyrics with an emotional punch. Kissing Someone Else winds down with the light-Broadway style of "It's Time To Say Goodbye", a musical afterthought that's fair enough on its own but a bit anti-climactic as an album closer.

Karen Jacobsen has a sweet voice that's very enjoyable, but she tries to exceed her limits several times throughout Kissing Someone Else. When Jacobsen stays with her strengths and workable range she's a very enjoyable listen. From a songwriting perspective the album is hit or miss, with some very good moments and some that might have been better left for the demo rack. It's a decent effort.

Learn more about Karen Jacobsen at http://www.karenjacobsen.com/. Kissing Someone Else is available as either a CD or Download from CDBaby.
Posted by Wildy at 5:00 AM

Excellent review WW. My feelings exactly. Great to read balanced comment that shows the reviewer has acually listened to the album and thought about it and is not the artists best friend. A "decent effort" yes. Would I buy their next record or pay to see a live gig? No. The singer is OK but the songs and performance verge on bland. Not enough to inspire a second spin of the disk unfortunately.