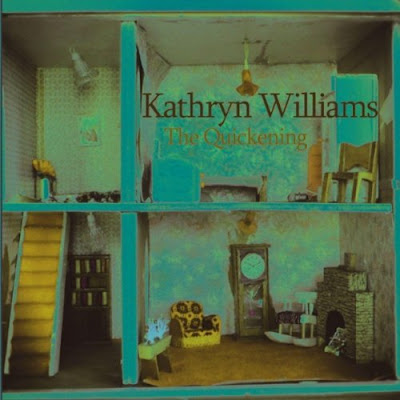 Kathryn Williams - The Quickening
2010, One Little Indian
Kathryn Williams has become quite the folk hero in her native UK the last few years, maintaining a strong independent streak. In spite of this, Williams took the label plunge with One Little Indian for her eighth album, The Quickening. The greatest challenge listening to The Quickening is keeping up with Williams' vision in her lyrics. More often than not Williams writes songs that more closely resemble a still-life than a story, capturing a single moment or emotion in song without the perspective of wider understanding. She injects these lyrical slices of life into incredibly ambient folk-rock arrangements that sparkle with quiet beauty, but often times the imagery is so esoteric it’s impossible to divine much meaning. Opening with "50 White Lines", Williams documents an ethereal night-time car trip. The imagery is vague but the music is hauntingly beautiful, and Williams' voice is like the soul of a lullaby, lulling the listener to a place beyond dreams.

"Just A Feeling" is self-reflexive; an exercise in making observations on observations and is reminiscent of artists such as Enya or Loreena McKennitt. The music has great flow while the lyrics spiral in free-form fashion. Williams gives more of a dark Celtic feel to "Winter Is Sharp", a highly descriptive yet ineffable tune that balances bleakness and beauty on a fine wire. "Wanting And Waiting" is a high point; a song about the reverie of the workday when you're just waiting to get back home to the one you love. It's a sweet melody, and an example of what Williams is capable of as a songwriter.

"Smoke" is a tragic love song about holding on to someone who won't be held. The rhythmic glockenspiel adds significant emotional impact to the tune. Things get a bit complicated on "Cream Of The Crop", a love song that mixes amour with ambition and ends up over-staying its welcome in the process. The other high point on the album is "Noble Guesses" an astute tune that explores the meaning of gaps in our personal history from looking at a phone album for what's been taking out rather than for what's there. The Quickening closes with "Up North", a love song of sorts intermittently about a person and a place. It's a disconnected moment, both pretty and dark at once.

Kathryn Williams both frustrates and fulfills expectations on The Quickening. At her best, Williams is an enthralling songwriter with a voice you could listen to all day. In less astute moments Williams can either be so lyrically pointed as to lose her listeners or so disjointed as to become lost in her own compositions. On balance, The Quickening is a solid effort, but the potential for greatness is realized here in flashes.

Rating: 3 Stars (Out of 5)
Learn more about Kathryn Williams at http://www.kathrynwilliams.net/ or www.myspace.com/kathrynwilliams. The Quickening is availavle through Amazon as either a CD or Download.
Posted by Wildy at 5:00 AM