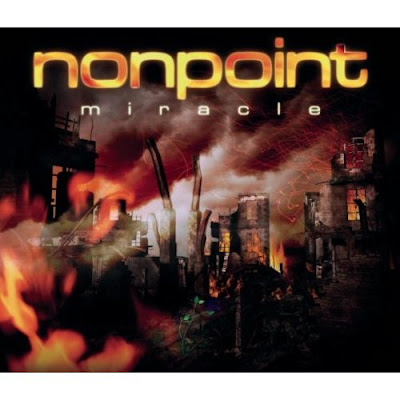 Fort Lauderdale, Florida’s Nonpoint keeps their heavy rock pedigree with Miracle, their latest album on 954 Records. The selling point of this band has always been their musicality even in the face of their heavy rock orientation. In that regard Nonpoint does not disappoint with their 7th studio album, Miracle, infusing their big rock creations with a melodic pop durability that helps even the heaviest of their songs to soar. Miracle opens with "Shadow", built on the sort of guitar riff that at one time launched stadium tours. Even the big vocal triads in the chorus suggest that Nonpoint clearly had their ears attuned to classic rock bands like Styx and Kansas at one time or another. "Miracle" drives right over you with an incessant guitar riff that speaks of the sort of inevitability the song implies about its villain. "Crazy" explores the madness that grows out of a frustrating relationship, done in a big expansive chorus that builds to, well... nothing. The song disappoints with its lack of resolution at times, although there is an artistic point in that failure to connect.

With "Frontlines", Nonpoint offers its collective perspective on the effects of war; although the conflict this time around is much more personal than we've become used to hearing. "Frontlines" explores the essentially emotional torture of constantly knowing you may not live to see tomorrow and juxtaposes it against the intent of fighting for someone important. It's a great tune. Nonpoint simply rocks out on "What You've Got For Me", going for the throat with a big rock tune about sx and little else. "Throwing Stones" moves the band back toward their mix of social commentary and riff-laden hard rock; it's a hard-driven pop/metal tune that's sonically dense without being overwhelming.

Nonpoint goes for introspective pop on "What I've Become", with a verse that sounds more like Matchbox 20 than anything else. Once the chorus comes around and the guitars kick in it creates a bit of cognitive dissonance as a listeners, as if one part or the other just isn't a genuine representation of the band. As if to throw off such any such concerns from fans, Nonpoint launches into the speed/thrash guitar of "Dangerous Waters", a song about inner demons and the need to fight them. This song simply blows the roof off and is reminiscent of some of the band's early recordings. Miracle winds down with "Lucky #13", keeping the sonic intensity intact while backing off the gas just a touch. This highly rhythmic arrangement is perfect for classic head banger action, but includes a bit of thought in the lyrics that's refreshing.

Nonpoint goes up and over the top for Miracle, creating perhaps the most balanced album of their career. Heavy musical aspects mix well with solid and intelligent songwriting (most of the time) to create a solid blend of rock/metal and pop sensibilities. Expect Miracle to be impacting Modern Rock formats for the rest of the year. There's too much good material here for Nonpoint to not spike a hit or two this time around.

Rating: 3.5 Stars (Out of 5)
Learn more about Nonpoint at http://www.nonpoint.com/ or www.myspace.com/nonpoint. Miracles is available as either a CD or Download from Amazon. Digital copies are also available from iTunes.
Posted by Wildy at 5:00 AM