Ellery - This Isn't Over Yet 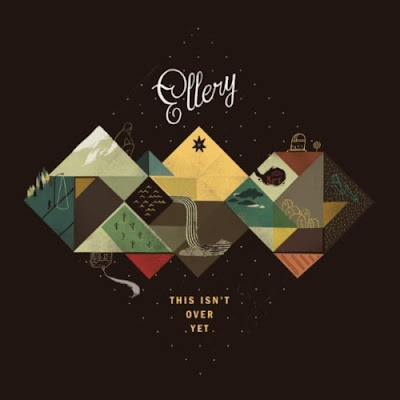 Ellery - This Isn't Over Yet
2010, Set Adrift Music/Ellery Music

Cincinnati duo Ellery hits the streets this week with their sophomore album, This Isn’t Over Yet. Tasha and Justin Golden sought out Grammy winning producer Malcolm Burn (Emmylou Harris, Blue Rodeo, Midnight Oil, Patti Smith) for This Isn’t Over Yet. Burn brought Ellery back to the roots of their sound, forcing the Goldens to re-imagine themselves in the process.

This Isn't Over Yet is a breakup album, pure and simple. Tasha Golden has a voice that's pleasant to listen to; with just a bit of an edge worked into a sweet sound that's easy to digest. As a songwriter, The Goldens shows an ability to construct affable melodies with sharp hooks, but the material on “This Isn't Over Yet” becomes a difficult slog through a morass of passive emotion Ellery starts out on good footing with "Where It's Going", a radio-friendly alt-rock single in the vein of Lisa Loeb, but as things fall apart Tasha Golden gets caught up in the same trite refrains that have been sung about love lost for time immemorial. Dwelling in self-pity and regret, there isn't a note of indignation or anger to be found anywhere on This Isn't Over Yet.

Ellery recovers at times, like the enjoyable "Someone To Say It To" and the coming-out-of-the-darkness hope of "Ways To Go", but much of the album plays like the incessant keening of a lovelorn teenager. Ellery brightens it up along the way with decent melodies, but you're likely to find your endurance waning long before the album is through. This is unfortunate, as Tasha Golden's voice is quite a pleasure, and it's obvious there is some writing talent here. This Isn't Over Yet marks a less-than exciting starting point, but there is hope for the future.

Rating: 2 Stars (Out of 5)
Learn more about Ellery at http://www.ellerymusic.com/ or www.myspace.com/ellerymusic. This Isn't Over Yet is available as a CD or Download from Amazon. Digital copies are also available from iTunes.
Posted by Wildy at 5:00 AM