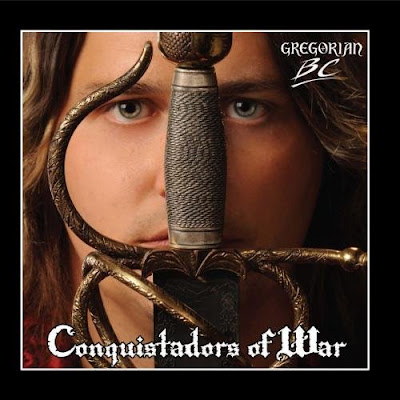 If a high school dropout can become a doctor of pharmacy, there's no reason a kid from Iowa with a penchant for Gregorian Chant and flamenco guitar can't become a rock star. That said, Brian Chupp, aka Gregorian B.C., is an overachiever. The rock star part is perhaps still in question, but he's achieved the rest already. With a talent and sound born of the same rebellious spirit that gave birth to rock n roll in the first place, Gregorian B.C. blends Chant, flamenco guitar, rock, blues and metal into a sound that has perhaps not been heard before. Singing with a relaxed baritone voice that occasionally calls Jim Morrison to mind, Gregorian B.C. has to be one of the most distinctive artists in rock n roll today. Gregorian B.C. releases his debut album, Conquistadors Of War on July 6, 2010.

Conquistadors Of War opens with "Arise", a heavy rock opus that will appeal to Sabbath fans. The song is a call to war and a call to freedom wrapped into one. It's an ambitious opening foray that announces both the musical intent and personality of Gregorian B.C., who styles himself after the 16th Century Spanish Knights from whom his name is derived. "Gregorian Starlight" mixes elements of progressive rock, 1970's metal and Gregorian Chant. "Live Today" embodies "Carpe Diem" in song, admonishing listeners to live in the moment and not work their lives away. Gregorian B.C. takes the arrangement off the map mid-song, showing some wicked guitar skills in the process. "The Clock Of Time" sounds a bit like Jim Morrison fronting The Moody Blues, circa 1972. It's the most laid-back composition on the disc; a somewhat surprising and gratifying change of pace.

With "The Rise Of Spain", Gregorian B.C. moves into more gothic territory, decorating it with dashes of Flamenco guitar inside an expansive rock arrangement. "The Rise Of Spain" is a warning to today's national powers to heed history and how even the mightiest fall in time. Conquistadors Of War keeps the same tone but returns to the Sabbath-inspired slow, heavy rock style. "The Spanish Armada" takes a more conversational tone, as Gregorian B.C. highlights symbols of the Spanish empire in the 16th Century. Conquistadors Of War closes with "East Coast Rocker", sounding more like Jim Morrison than at any other time during the album.

Conquistadors Of War is an uneven but intriguing experience. Nearly half of the album is a historical song cycle with geo-political implications for today's rapidly changing international politics. The rest is a collection of Black Sabbath or Doors inspired tunes; the sum of which suggests that Gregorian B.C. has found a theme but not a solid writing voice he's yet comfortable with. The blend of sounds on Conquistadors Of War is highly original in spite of the influences referenced here; Gregorian B.C. has a sound that will gain him a lot of intention, although it's not as accessible to current mores as it would have been in the 1970s. If you're a fan of Black Sabbath, The Doors or other such acts, then Gregorian B.C. will appeal to you. His is an interesting sound.

Rating: 3 Stars (Out of 5)
Learn more about Gregorian B.C. at http://www.gregorianbc.com/ or www.myspace.com/gregorianbc. Conquistadors Of War drops on July 6, 2010. You can pre-order the CD from Amazon. Expect wide availability.
Posted by Wildy at 5:00 AM