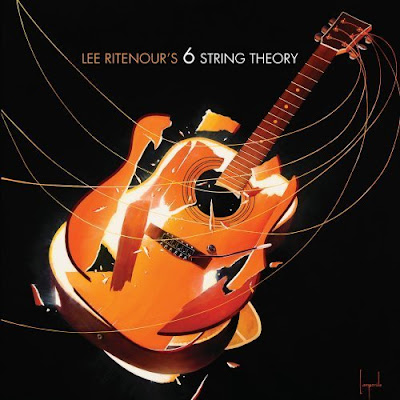 Lee “Captain Fingers” Ritenour really needs no introduction. A participant in better than 3,000 recording sessions, Ritenour was an in-demand throughout the 1970’s and is considered a pioneer in smooth jazz and jazz-funk. Over the years Ritenour has amassed on GRAMMY Award and seventeen (17) additional GRAMMY nomination. Ritenour recently released his 43rd album, Six String Theory, drawing from multiple music styles to create a set

Six String Theory opens with measured, soulful play on "Lay It Down". Ritenour builds the song in intensity until he explodes in a flurry of fretwork halfway through, growing into a more distorted jazz-inflected romp. "Am I Wrong" opens with an enticing-yet-simple blues riff played off against harmonica. Ritenour's vocal is soulful and bluesy and the tune is quite catchy. "L.P. (For Les Paul)" is done in an improvisational jazz form, allowing the guitar and organ to stake out significant territory and create. The rightness of Ritenour's band is frankly amazing; their energy contagious. Ritenour blends southern rock, blues and even a tinge of gospel on "Give Me One Reason", using a big, fuzzy guitar sound to give the song a bit more oomph than you might be used to. It's a brilliant reading on a classic tune.

Ritenour turns a bit more aggressive on "68", a powerful rocker with blues roots. Ritenour pulls off some serious riffs with attitude. The style of play here is somewhat reminiscent of Kim Mitchell's style with Max Webster. "Moon River" finds Ritenour back in improvisational forms for a highly variant but intriguing version of Mancini's "Moon River" before moving into the tight and lively "Why I Sing The Blues". "Daddy Longlicks" is the sort of song guitarists live to play; Ritenour mixes speed, precision and musicality in a fashion that Chet would approve of. Sting's "Shape Of My Heart" takes on new life here, as Ritenour injects the song with a heart that is present in the original but magnifies it several times over to bring out the elusive melody of the song.

"Drifting" finds Ritenour making use of the entire guitar in a rhythmically complex but thematically simple song that's worth spending some time on. "Freeway" Jam is a rock instrumental falling somewhere in the gap between 1980's melodic rock guitar and Eric Johnson. The nod to Johnson continues on "Fives", which finds Ritenour in some very unusual time signatures while creating dark melodic musical tendrils in one of the more intriguing pieces on the album. Ritenour closes with Luigi Legnani's "Caprices, Op. 20, No. 2 and 7", played beautifully and with a quiet reserve that speaks to period as much as to Ritenour's tremendous ability to be a stylistic chameleon with a guitar in his hands.

Six String Theory finds Lee Ritenour sampling styles and sounds across genres and occasionally blending styles in expected ways but with unexpected grace. Ritenour has long been one of the greats with a six string, even if his star never shines as bright as those of Clapton, Knopfler or Beck. Six String Theory is serious guitar work that you'll enjoy whether you're a serious guitarist, a weekend picker or even just a fan.

Rating: 4 Stars (Out of 5)
Learn more about Lee Ritenour at http://www.leeritenour.com/ or www.myspace.com/leeritenour. Six String Theory is available as both a CD and Download from Amazon.
Posted by Wildy at 5:10 AM

While it is understandable that one would expect that Lee Ritenour is playing all of the guitar parts on this release, that is certainly not the case. Rather than release a new solo disc in 2010, Ritenour has decided to create a sort of tribute to his main instrument - the Guitar...and in doing so, he enlisted the assistance of many great practitioners from various styles of music.
So while Rit does indeed perform on a portion of the songs on this wonderfully diverse project, if one took a look at the credit list then it is apparent that on numerous cuts, Rit acts mainly as producer, arranger, gatherer and enabler of the vast talent which is on display.
For example, Rit does not perform on Am I Wrong? He arranged the track with the song's composer, guitarist and vocalist Keb Mo, who sings this particular version as a duet with Taj Mahal. Nor does he perform on the cover of Tracy Chapman's Give Me One Reason. That was arranged by Joe Bonamassa, who sings and plays guitar in a duet with singer/guitarist Robert Cray.
Rit also does not appear on the track 68. That was written and arranged by Toto guitarist Steve Lukather, and features contributions from guitarists Neal Schon and Slash. The guitarist and arranger on Moon River happens to be the legendary jazz guitarist George Benson, who also performs the solo guitar version of My One And Only Love on this album. Rit does indeed perform guitar on Lay It Down but guitarist John Scofield is also responsible for many of the great licks on that track. Likewise, it is Philly great Pat Martino who also duets with Rit on the tribute to Les Paul, titled LP. On the song Freeway Jam, made most famous by the master Jeff Beck, it is actually Mike Stern playing the majority of the song while Lee Ritenour and Japanese guitarist Tomoyasu Hotei alternate solos on the vamp out.
Ritenour also included songs from up and coming players who he became aware of from watching youtube. Daddy Longlicks is composed, arranged and performed solely by a young guitarist by the name of Joe Robinson. Rit does add subtle accompaniment to the piece and co-arranged Drifting but the bulk of the song is performed on guitar by its composer Andy McKee. Fives is a spotlight on British guitarist Guthrie Govan, as he wrote and arranged the track and performs the sole guitar part on the song. Finally, the concluding track is a performance of Legnani's Caprices by the talented young guitarist Shon Boublil, who won the contest that Ritenour and Lukather held to discover new talent.
So of the 15 tracks, Rit only performs guitar on 7 of them. Which certainly does not detract from the immense appeal of this release. All of the players gathered together have proven themselves to be top notch and world class. This is one of the year's best so far.