Various Artists - I Refuse To Vote 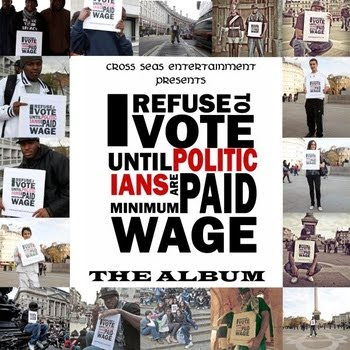 VA - I Refuse To Vote (Until Politicians Are Paid Minimum Wage)
2010, Cross Seas Entertainment
I Refuse To Vote, the latest compilation from England's Cross Seas Entertainment features 12 fresh songs that range from Hip-Hop to Electronica to alternative post-punk folk music with a sidebar into reggae thrown in for good measure. Featuring artists such as Blee, Mark Handley, The Entertainment, Anima Pop, Charma D and Johnny Black, I Refuse To Vote looks to capture the sort of populist anger that passes for alternative political thought these days in loose, mellow arrangements from across the musical spectrum.

I Refuse To Vote kicks off with the bland electro-pop of Anima Pop, which takes ample liberties with Henry Mancini's "Where Do I Begin", warping into minor keys and offering just enough variation to keep it out of the copyright control office. The arrangement borders on inventive, but with no energy and no dynamic change the song fails to go anywhere. Blee offers up two numbers, equally bland in their presentation. The Entertainment show the first signs of life with a solid rock tune that will shake you awake ("Free"). Johnny Black's "The Outlaw Gordon Brown" seems a bit dated now, but is fine bit of political commentary in song. Mark Handley will make you crack a smile with "I Can't Be Arsed", and Raggadon offers up a decent effort with the "Hackney".

I Refuse To Vote is one of those experiences where you might be better off giving it a listen and then just paying for the tracks you like. Compilations generally work well because they have a guiding principal, whether a theme (such as a cause) or a style of music. I Refuse To Vote bases itself around the disaffection of a young generation growing up in a world that seems like it’s getting worse than getting better, but the sort of anger that drove innovations like punk is presented here so passively it might as well have stayed home.

Learn more about the I Refuse To Vote compilation at Cross Seas Entertainment's website, where you can download the album.
Posted by Wildy at 5:00 AM