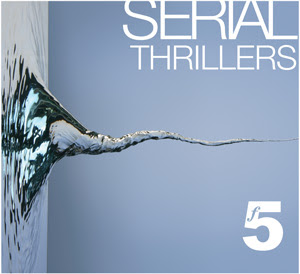 Boston is home to Serial Thrillers, a duo comprised of singer/songwriter Paul Ortolano and drummer Stephen Clements. The two have played together for years, sharing stages with acts such as Kings X, Godsmack, The Tubes, Warrant and Extreme. They also spent some time on tour with Dale Bozzio and Missing Persons. With both regional and national exposure, the Serial Thrillers have reached that point where the right song or album could catapult them fully into the national scene. Serial Thrillers may have found what they’re looking for in their latest EP, F5.

F5 opens with the catchy rock n roll of "Ordinary Days", complete with big chorus and a danceable rock beat. The pop sensibility and melodic sense of Serial Thrillers is top notch on this tune, and while "Ordinary Days" doesn't clearly fit the sort of fare commercial radio typically embraces, it's hard to imagine this song not getting some serious attention on that level. "The Floppy Swing" starts a bit slow, but by the time you get to the chorus you hear the same pop/rock sense that drove "Ordinary Days". Serial Thrillers get into a somewhat more jangly guitar sound on "You Can Say Anything" in an upbeat rocker that's infectiously catchy. Once again, Serial Thrillers are perhaps a bit off the beaten pop/rock path, but it's hard to imagine this song not getting serious attention from commercial radio. In fact, the band might be just different enough to catch on in a big way. "It Comes To You" is the obligatory power ballad, although it's actually quite a bit better than the usual fare. F5 winds down with "Yeah Okay"; an angular pop/rock tune that's light and easy fare but highly danceable and a lot of fun to listen to.

Serial Thrillers have a sound that's just waiting for the right audience. The band plays decidedly edgy rock music with real pop charm and a strong melodic sense. This whole music business is highly fickle, and it's impossible to predict success, but if the lords of musical judgment haven't lost their minds, Serial Thrillers are going to be huge one day. If rock n roll has a future in the post-genre world, then it rests firmly (and safely) in the hands of bands like Serial Thrillers.

Rating: 4.5 Stars (Out of 5)
Learn more about Serial Thrillers at http://www.serial-thrillers.com/ or www.myspace.com/serialthrillers. F5 is available as either a CD or Download through the Serial Thrillers' web store.
Posted by Wildy at 5:20 AM