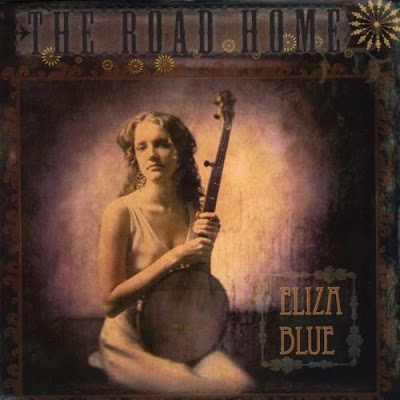 Minnesota's Eliza Blue has been haunting Twin Cities' clubs for a few years now with her deeply personal folk/country music. A classically trained violinist, Blue seems adept with any instrument with strings, playing guitar, violin, banjo, mandolin and cello as well as providing lead and backing vocals on her sophomore album, The Road Home. Blue recorded The Road Home over a seven month period in 2009 in her attic, having withdrawn there with recording equipment due to intense stage fright. With production assists from Ben Durrant (Andrew Bird, Dosh) and Darren Jackson (Kid Dakota, The Hopefuls), The Road Home is Eliza Blue's most personal (and likely persevering) work to date.

The Road Home leads off with "Ask Me To Dance", the last song written and recorded for the album. Based loosely on a poem from Sufi poet Rumi, "Ask Me To Dance" explores heartache and the hope to love again in very pragmatic yet poetic terms. Listeners will get the picture of someone who has been badly burned in the past and is reticent to try again, but is perhaps more fearful of being alone. It's a gorgeous tune with deep undertones of humanity and emotional survival that might just shake you. Blue recalls Sarah McLachlan's darker, early work with "Oceans & Fields". The song is full of an age-old sadness that seems aged in generational terms rather than in simple years, and is very striking in it’s honestly and abject beauty. "Instrumental #1)" is a brief transitional piece that blends into the powerful exhortations of "Little Sally".

"Little Sally" is a song of unrequited love and an almost repressive hope against hope. Dark undertones of obsession and perhaps even possession run through this song, while Eliza Blue pours sorrow and regret mixed with a hope-cum-certainty into the chorus. It's a powerful song with a story line that must end badly. In "Ashes & Ashtrays", Blue tells a tale of a love that seems on the surface to be pre-destined but never works in spite of the best intentions. It's a song of regret, mixed with a love that's never died but has been both cured and strengthened by time and distance. In the end the song looks back from the final resting place of one of the two with a finality that bears the scars of pragmatism. "Swords & Shields" will ring true with anyone who has a loved one off at war; it's a request to the universe at large to allow her love to come home. "Swords & Shields" blends a martial beat with banjo and a Celtic feel to create a stark, open sound that borders on the sort of feral emotion that perhaps only a true love would feel.

Blue uses her classical training to color "Mending Fences" with haunting, ethereal violin passages. She is also at her vocal best in this tune, which is steeped in imagery that reflects the distinct complexity of human emotion in a relationship. If you're the sort to re-visit a song over and over to unwrap its lyrical complexities, then "Mending Fences" will be among your favorite tracks on the album. "The Road Home" is a highly personal song of heartbreak from someone who’s taken second place to a bottle. Blue is telling him goodbye in loving but firm terms. You can hear the heartbreak in between the lines, but she's stoic right to the end, showing greater concern for her love than for herself. The emotion here is all beneath the surface, although it comes a hair's breadth from breaking the surface on several occasions. The song is beautiful in its struggle between heart and mind, and Blue sells like she's in the throes of the moment.

With "Wishing Well" Eliza Blue shows the renewal of hope. She doesn't understand the place she's in, but doesn't want to leave behind the promise of love she's found. It's one of the simpler arrangements on the disc, extolling the simplicity of belief that things will be alright after all. Moving from promise to promise, Blue gives a moving performance on "Gospel Song". While perhaps more folk than gospel in style, "Gospel Song" is full of the faith and promise of an afterlife where all iniquity is stripped away and we come home to where we belong. It's a thoughtful yet stirring recovery from someone who’s spent the previous eleven songs plumbing the emotional depths of loss; a sign of hope to all who toil in the dark emotional night of sorrow or regret. Blue closes with a reprise of "Ask Me To Dance", this time imbued with the light of hope that she's found.

A sign that love can be born both from sorrow or from hope, or perhaps just an acknowledgement that love, loss and recovery are a cycle that will repeat... either way The Road Home leaves listeners enriched. The Road Home, and Eliza Blue, are not to be taken lightly. Blue pours her heart into every song in a way few artists ever imagine. Whether or not the songs are autobiographical, Blue performs them as if she lives them each time out, like a great actor inhabiting a role. In the freedom of her attic, Eliza Blue has thrown down the walls and created a masterpiece of music, thought and emotion that you will treasure for years to come. The Road Home is a Wildy's World Certified Desert Island Disc.

Rating: 5 Stars (Out of 5)
Learn more about http://www.elizabluesings.com/ or www.myspace.com/elizabluesings. The Road Home is available as either a CD or Download from Amazon. Digital copies are also available from iTunes.
Posted by Wildy at 5:20 AM