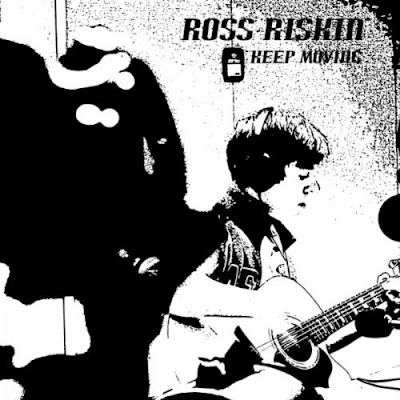 Ross Riskin is a 19-year old singer/songwriter from Orange, Connecticut with perfectionist tendencies and an ear for melody. Influenced by artists ranging from Third Eye Blind, Weezer and Death Cab For Cutie to Radiohead and Coldplay, Riskin's style is a melting pot of late 90's and early-oughts alternative rock as interpreted through a singer-songwriter motif. Riskin recently released his sophomore EP, Keep Moving, and is currently burning up the I-95 corridor promoting the EP and spreading his sound.

Keep Moving is a thematically complicated but musically simple breakup album. Riskin features a pleasantly imperfect voice in a nearly talk-sing style in unadorned arrangements throughout the album. Riskin starts off with a musical treatise on grief, with a musical prologue "In The Future" featuring the moment of separation and followed quickly by denial; "Get You Back" and justification "Something Better Than Me". Riskin promises his return on "With The Sound", although it’s unclear if his intended is listening; there's still a disconnect running through the narrative here that suggests that the narrator isn't dealing with the reality of moment.

"In Motion" is a declarative of the tendency to over-compensate after a loss, moving too fast or too far in order to simply not think "I'm in motion / I can't stop now / I don't know how to slow my speed down". The song is lyrically awkward but honest, showing more heart than art. "For You And Me" keeps things simple, and is the best pure songwriting on the album. Up until now Riskin has written in a young voice, whether intentional or not. Here there is an economy and sharpness to his songwriting that is a significant advance. "The Ghost" makes use of significant reverb to color the song in haunting ambience, but Riskin reverts to his young writing voice in a bout of over-simplification that simply goes on too long.

Riskin turns to hope on "Could You Be Mine", a song less of destiny than opportunity that is a mix of love and mild obsession. The song sounds well-intentioned, but there's a thread of inevitability that runs through Keep Moving that seems manufactured. "Shine" is a more mature outlook on a relationship that is as doomed as it was in the opening song; it's a negotiation with fate and human emotion that Riskin isn't about to win that expresses distinct hope but is colored in the same reverb of "The Ghost". Riskin closes with "In The Past", finally putting everything behind him, but still trying to justify the path he's walked.

Ross Riskin delivers a series of tunes as personal as journey entries done up in minimal instrumentation on "Keep Moving". The song is full of human emotion, frailty and self-delusion, but it's an honest sort of self-delusion that we all engage in from time-to-time. Riskin sticks to bare-bones instrumentation, letting the lyrics speak for themselves in a brave and measured relaying of the sort of mistakes we all make while learning the ropes of relationships. Musically, Riskin may benefit from collaboration, as several of the songs here would flourish with a slightly broader musical canvas, but the stark arrangements on Keep Moving work well in their own right and in their context. This album will leave you curious about what else Riskin has to offer.

Rating: 3 Stars (Out of 5)
Learn more about Ross Riskin at http://www.rossriskin.com/ or www.myspace.com/rossriskin. Keep Moving is available as a digital EP from Amazon and iTunes.
Posted by Wildy at 6:23 AM