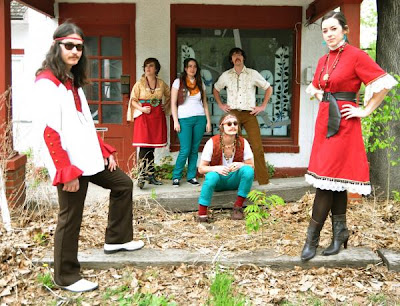 Lawrence, Kansas chamber-pop ensemble Mammoth Life returns with their second full length album, An American Movement, on June 22, 2010. The follow-up to 2009’s Kaleidoscopic Art Pop finds Mammoth Life in a more ambitious mode, writing a concept album about the breakdown of civilization and the power of individuals to stem the tide of disintegration. Much like in life, Mammoth Life find both great success and tremendous growing pains in An American Movement.

An American Movement opens with “Be My Own Anthem, One’s Self I Sing”, sounding like the opening music to a show or movie, playing off Ennio Morricone’s classic theme from The Good, The Bad And The Ugly. Mammoth Life uses voices here to add different dimensions to the orchestration. “Discoveries” is a somewhat frantic rock/orchestral venture that flows on the energy of new things, showing how the energy of disconnected events can lead to great moments. “Disrupting The Extinction Of Distinction” continues in the same vein, but lacks the punch of “Discoveries”. With “Upon The Shoulders Of Giants”, Mammoth Life treads on the edges of a puzzle. The vocal harmonies are strong and match well to the undulating orchestration, but the lead vocal is very pitchy and a bit difficult to take.

“With Sanctity, Our Declaration” is the most accomplished composition on the album. There’s an upbeat, wagon-train feel to the song, which again uses vocalizations as instrumentation. Mammoth Life imbues the song with a surreal, lonely feel that hides within the jaunty nature of the tune; masking a song of memoriam as a declaration of freedom (or perhaps it’s the other way around). So having reached the pinnacle of the album, it’s a question of whether Mammoth Life would descend gracefully or precipitously. Unlike on past albums it is the latter on Kaleidoscopic Art Pop, it is the latter on An American Movement. “Dreaming Is Destiny” feels incomplete, almost incidental to itself. “Boy Blue, An American Lion” and “We Are Within A Holy War” give the impression that Mammoth Life is a bit lost in the middle of their concept, fighting to tell a story that just hasn’t developed enough yet to be elucidated in song. By the time Mammoth Life gets to “The Differences”, they’ve descended into an amateurish cliché of cultural study text that is artistically and intellectually beneath the band. Mammoth Life recovers their composure for the closing number, “Marvelous To View”, but it’s almost an afterthought.

If you’ve listened to Mammoth Life before, your expectations will be high for An American Movement. Over the course of the first five tracks your expectations will be met. Unfortunately it appears that Mammoth Life ran out of creative gas thereafter, filling out the album with tracks that, by the standards they’ve set with their past work, are mundane. The first half of the album released as an EP would be a solid 4-star effort. Unfortunately, the second half of the album struggles to make even 2 stars. Mammoth Life is good enough and unique enough that you’ll want to at least acquaint yourself with An American Movement. The elements that make Mammoth Life a great listen are present on the album, but it’s not the consistently great effort you might expect.

Rating: 3 Stars (Out of 5)
Learn more about Mammoth Life at http://www.mammothlife.net/ or www.myspace.com/officialmammothlife. An American Movement drops on June 22, 2010. Expect availability through Mammoth Life's website, Amazon, iTunes and other web outlets. Photo credit: Val Skubal
Posted by Wildy at 5:00 AM