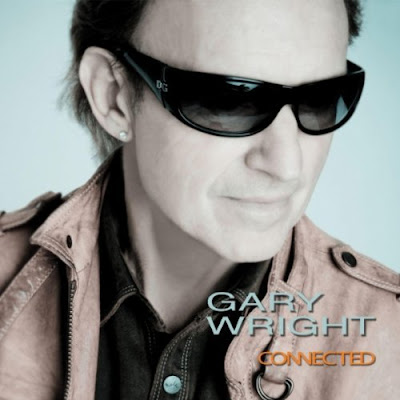 Gary Wright has had a long, storied career. He got his start in the 1954 Broadway production of Fanny as Acolyte, graduating to the role of Cesario (the song of Florence Henderson’s Fanny). During the 1960’s, Wright joined Billy Markle in the duo Gary & Billy before joining Spooky Tooth in 1967. In 1974 Wright went solo, and two years later released the song for which he is best known, “Dreamweaver”. Along the way, he’s worked with George Harrison (All Things Must Pass) and Ringo Starr. On June 8, 2010, Wright releases his fourteenth solo album, Connected.

Connected opens with the funky smooth 1970's pop/rock of "Satisfied". Big vocal triads decorate the song with harmonies while Wright keeps a smooth, R&B influenced vocal as the center point. The song is done in a big open arrangement with a dance beat that allows the song to connect through a number of commercial radio markets. "Get Your Hands Up" keeps with the 1970's dance/rock/pop feel in a mid-tempo party song you won't be able to get it out of your head. "Under Your Spell" is a schmaltzy 1970's AM Radio love song done in smooth overtones. It borders on hokey cliché but retains a certain beauty along the way.

"No One Does It Better" celebrates a fulfilling love with rock energy and a dynamic arrangement. If there's a clear single with current potential chart impact on the album, it's this song. On "Can't Find No Mercy" Wright invests in Funk and Soul with hints of the Blues in the song's lineage. It's a great tune, meaty but danceable, supported by strong vocal harmonies and a lead that's worth hearing. "Gimme Some Time" is an infectious little pop song with legs; the sort that sounds like it should be a hit even if Wright isn't exactly top-40 fodder these days. With the right push this song could easily wind up on the Adult Contemporary Charts. Wright takes a Peter Gabriel turn on "Connected" before launching into the string-enhanced "Kirra Layne", an ode to a newborn that celebrates the hope of a new life and the unpainted canvas on which each of us paints. Wright closes with "You Make Me Feel Better", a formulaic pop ballad that's a solid closer but not as original as much of the material on Connected.

Gary Wright returns with his first pop/rock album in some time and mostly gets it right. Connected is stuck somewhat in the 1970's or early 1980's, but the pure pop sensibility and soulful mien of Wright's songs will strike home across generations. Wright hasn't re-created himself the way some artists do in their 50's and 60's. Instead, Wright has found himself once again, delivering the sort of quiet quality work you'd expect.

Rating: 3.5 Stars (Out of 5)
Learn more about Gary Wright at http://www.thedreamweaver.com/ or www.myspace.com/therealdreamweaver. Connected drops on June 8, 2010. You can pre-order either the CD or a Download from Amazon.com.
Posted by Wildy at 5:10 AM