Nomad Planets - You're Never Lost Until You Panic 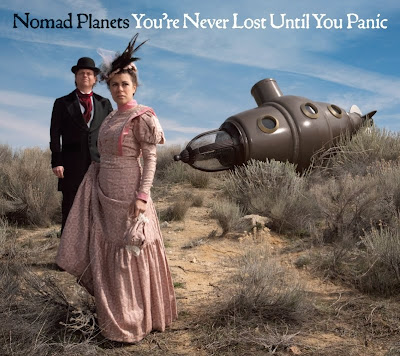 Nomad Planets - You're Never Lost Until You Panic
2010, The Fairbanks Label

Chicago rock/folk/Americana quartet recently released their third album, You’re Never Lost Until You Panic, continuing the development of a sound that the band began searching for in 1999, but was really born in 2001. At the time Nomad Planets were working on their second album, Edge Of Time, when half of their recorded output was lost in a computer mishap. In spite of this loss, Nomad Planets rebounded and re-recorded the album, finding new life and vitality in the process. Even though it’s been five years since the release of Edge Of Time, it’s apparent that Nomad Planets still have that drive on You’re Never Lost Until You Panic.

You're Never Lost Until You Panic dawns with "Here You Are", a decent Americana-pop tune with a sing-along chorus and a rock-a-bye feel. It's a great opener that puts the listener immediately at ease. "Happiness", surprisingly, comes across a gritty, angry piece. Listeners will form their own opinions, but the juxtaposition of title and feel is surprising. "So Far So Good" represents the pick-up not so much as an art of a means to find someone as needy as you are; it's a great story song in a decent Americana arrangement. "Centerpiece" continues this emotional exploration with jealousy, examining the effects it can have on your mind. This mournful tune is written from the perspective of loss both imagined and real, the former causing the latter rather than preventing it.

"The Flood Song" recalls a great flood on 1962 (Delaware, Ohio, Germany?) and its aftermath from the perspective of someone who lost everything in the deluge. A man looks back on the home he lost and his great love in disbelief ("When the water took my wife it caressed her then consumed her / I Still don't know why it spared the likes of me."), displaying a deft ability capture moments in stark and moving language. "Wherever The Wind Blows" addresses the human tendency to react in herd-like fashion in the political process rather than investing thought in their decision making. It's an indictment of modern society and those who lean to the political right. "Wherever The Wind Blows" is incisive and accurate as far as it goes, but would have more punch if the approach were ecumenical.

Nomad Planets offers up a decent country-flavored cover of Pink Floyd's "Wish You Were Here" in the vein of Luther Wright & The Wrongs. Reverent and subdued, it's a solid listen but lacks the impassioned helplessness of the original and the campy smirk of Wright's stellar cover. "Walking In Quicksand" is a musical parallel for struggling to get ahead while falling further behind. It’s an apt parable for a debt-obsessed culture that mortgages tomorrow for today and ends up owning neither. Nomad Planets takes next to "The Liberty Trail", a song about recovery; breaking free from the chains that hold us down. It's a solid and motivational tune delivered in plaintive tones that's enjoyable and uplifting in humble fashion. Nomad Planets close with "The Modern Ones", a song about the breaking down of traditional boundaries delivered in dark mercurial tones that suggest the sort of uproar such things always raise in cultures from the talking heads to small town cognoscenti.

You're Never Lost Until You Panic is a dark collection about depths and turns in the human condition that might not make the evening news but don't necessarily comply with the expectations of a society with puritan roots. There's a solid political undercurrent to the album that jumps out once in a while but mostly hides deep within songs that almost despondently suggest it's okay to be who you are. This dichotomy plays like a mixed message that's more likely to confuse than empower decisions. It's as if Nomad Planets pursue both advocacy and plausible deniability on You're Never Lost Until You Panic. It's an interesting mix, but likely has a limited demographic of listeners waiting for it.

Rating: 3 Stars (Out of 5)
Learn more about Nomad Planets at http://www.nomadplanets.com/ or www.myspace.com/nomadplanets. You're Never Lost Until You Panic is available as a CD or Download from Amazon.com. Downloads are also available via iTunes.
Posted by Wildy at 5:00 AM