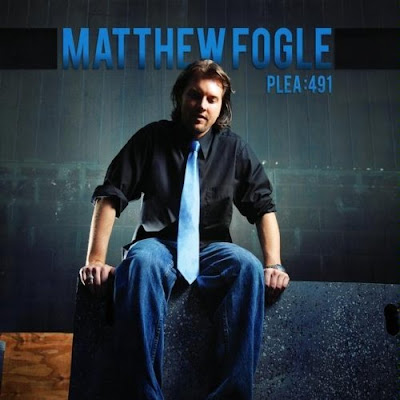 Matthew Fogle didn't grow up with music the way many singer-songwriters do. The Louisville, Kentucky native started his odyssey ten years ago by singing melodies into a cassette recorder. Over a short period of time Fogle had accumulated so many original tunes he was inspired to buy an acoustic guitar. With very little musical knowledge but a lot of motivation, Fogle turned into a prolific and capable songwriter in a short stretch of time. After eight years playing secular music, Matthew Fogle was bitten by the Contemporary Christian Music bug. Jump forward to November of 2009, with Fogle entering Franklin, Tennessee's Dark Horse Studios and laying down five original Contemporary Christian tunes under the guiding hand of producer Rick Mara. The result is Fogle's latest EP, Plea:491.

Plea:491 is carried by the courage of Matthew Fogle's convictions. Fogle wears his heart on his sleeve, professing love, adoration and fealty to God, all the while struggling against a tendency toward awkward lyrical turns and a voice that occasionally does its own thing with regard to pitch. Fogle writes catchy tunes with solid arrangements that run the gamut from folk to rock n roll. Plea:491 opens with "God Of Power And Might", a catchy worship song set in a solid acoustic-rock arrangement. Fogle's convictions are clear, but he does struggle mightily with his breath control and phrasing, particularly at the end of phrases. "Come Back Source" is offered up in a simple rock arrangement, and is another solid worship tune but is not likely to find much traction outside of fans of worship music. It's a catchy, danceable tune but the lyrical approach is child-like in its simplicity and occasional awkward turns of phrase.

"Garden Flame" features solid guitar and a good, strong melody, but Fogle's vocal issues are more apparent here than elsewhere on the album. This is the strongest songwriting on the album, but anyone with any sort of ear for pitch will have a hard time getting by the melodic inconsistencies to hear the song for what it is. Fogle brings a more muscular guitar sound on "Splashdown", but this approach turns out to be at-odds with the song itself. "Splashdown" calls out for rescue. Fogle closes out with "You'll Be There", which sounds like a heartfelt paean to a loved one who’s already passed beyond the veil. While full of emotion, some of the lyrical turns are so awkward ("and we'll match the sun to set") as to a major distraction. "You'll Be There" wins points for heart and for a truly decent melody, but wipes them away with the awkward lyrical fumbling that melody is married to.

Songwriting and faith have tremendous similarities. Both involve listening to an inner voice. In songwriting, there are as many names used for that voice as several thousand years of human history has been able to manufacture. Come to think of it, that's true when it comes to faith as well. The truest expression of faith or of songwriting is allowing that inner voice to speak to you and channeling it out into your world. Hence the admonishment of many religions that people be like children and accept. In fact, it's not uncommon to hear a songwriter talk about the occasional song that practically writes itself in about five minutes and turns out to be their best work. In both faith and songwriting, things go awry when we think too much about that voice and begin to impose our own ideas on it. At this point we are no longer speaking in our true voice, but garbling it with the machinations of second thoughts that are often better left to their own devices. Listening to Plea:491, it seems clear that Matthew Fogle allows his inner voice clear rein in the melody and arrangement departments, but tries too hard to fit his own lyrical creations into the gifts of his muse. Musically, Fogle is a solid composer with a penchant for simplistic but catchy folk/rock arrangements. Fogle's voice is decent, and while he struggles with pitch at times, such things can be overcome with catchy songs and an unfettered authorial voice. Fogle's not there yet, but Plea:491 does show some promise; it's a decent worship album that won't find much traction outside of that market.

Learn more about Matthew Fogle at http://www.matthewfoglemusic.com/ or www.myspace.com/matthewfoglemusic. Plea:491 is available as either a CD or Download from Amazon.com.
Posted by Wildy at 5:00 AM