The White Roses - Take Back Your Mind 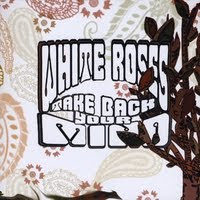 Take Back Your Mind opens with "Drive", a bluesy rocker with spoken word vocals about the value of a college education in the current economic environment. Rose's voice is breathy but distinct, and the vocal harmonies are pleasant. "I Love Being Young" is a great tune; again presented in the talk/sing style, The White Roses build in a great backbeat and solid guitar work into the most danceable song on the album. "Santa Cruz" is a modern drug anthem that has a 1960's soundtrack feel; the song is catchy and the lyrics dark, a nice combination.

The White Roses get philosophical on "Going Home", exploring the forces that drive youth away from home and the ones that bring them back years later only to find what they left to seek. It's a catchy bit of rock n roll songwriting and displays an intellectual depth that's only hinted at to this point on the album. Bossa Nova is the name of the game on "Don't Look Back", an odd but welcome turn that shows off a completely different sound and style for the band. The White Roses particularly impress with their vocal harmonies here. Take Back Your Mind closes with the guitar solo-driven instrumental "Lift Off". The song is a showpiece, and opportunity to show off the band's instrumental chops without making it too obvious that this is the point.

The White Roses turn in a solid effort on Take Back Your Mind. You'll walk away with the impression that Heather Rose missed her intended generation by four decades or so, as she spins musical yarns against a sound that would have been as welcome in Berkeley as it is in Berklee. Take Back Your Mind crackles with subverted wit, intelligence, and a post-modern diagnostic perspective that's both dissociative and highly personal. The White Roses are an experience

Rating: 3 Stars (Out of 5)
Learn more about The White Roses at http://www.whiterosesrock.com/ or www.myspace.com/iheartthewhiteroses. Take Back Your Mind is available as either a CD or downoad on CDBaby.
Posted by Wildy at 5:05 AM