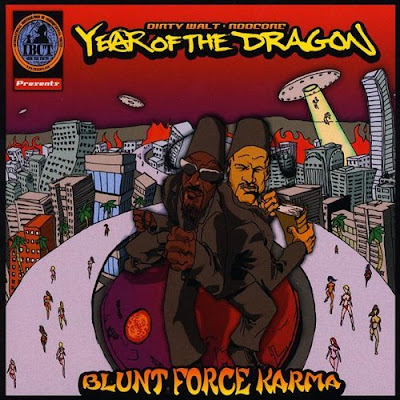 Year Of The Dragon - Blunt Force Karma
2010, The International Brotherhood Of Consequential Truth

When Fishbone disintegrated after a quarter century, Dirty Walt Kibby and guitarist Tracy Singleton (Spacey T) went in a new direction together. Focusing on a heavy punk/metal sound, the band soon pulled in Roderick Palmer (Rodcore) as a vocalist and began trading under the name Year Of The Dragon. With regular gigs in L.A. and a well-received EP in A Time To Love Is A Time To Bleed, Year Of The Dragon drew on their core base of Fishbone fans while adding new fans drawn to the aura of the new band. Year Of The Dragon is back in 2010 with their first full-length album, Blunt Force Karma. It's a return to the concept albums of the 1970's and early 1980's, with a kitschy back story involving space aliens locking up all of the attractive women on earth. Year Of The Dragon leads the fight to restore the right in an album where the brute intensity of the band's sound sometimes struggles with the corny subtext that parallels that of Styx' Kilroy Was Here.

Year Of The Dragon starts strong with “Ispo Facto”. Big, impressive guitar work and a rap-style vocal line and a chorus about the downfall of freedom and end of the world make this a winner. Rodcore and Dirty Walt keep this song vital, appealing to the populace to educate themselves and stand up for their rights against a government that takes but does not give back. “Poppin’” goes to the other extreme, seeming to be more a song about shock value than thought. On “Destroy Your Fear”, Year Of The Dragon goes for a 1970’s metal sound ripe with minor chords and vocal triads. This is the band at their finest, creating songs that are progressive in construction and diabolical in tone. “Jailbreak” is the party song on the album, a fun rocker in the best early metal tradition.

Year Of The Dragon strips things down for “After The Dawn”, an interesting spoken word approach with a sung chorus built around a highly intriguing riff. The bare-bones presentation is a solid change of pace but dissolves back into the big guitar sound of the title track. “Blunt Force Karma” is a great tune with a message wrapped around an infectious funk rhythm. “Who Will Save You Now” is a driven rocker with philosophical learns that serves as an ample appetizer to the closing track, “Walking Tall”. “Walking Tall” features a crazy guitar riff you’ll have to hear to believe. Year Of The Dragon walks the line between Body Count and Black Flag with shades of Dio-era Sabbath on the most vibrant track on the album.

Year Of The Dragon hits a couple of small rough patches on Blunt Force Karma, but in general manages to match powerful messages with powerful sounds. Blunt Force Karma is one of the more convincing rock/rap hybrid albums of the new year thus far. Rodcore and Dirty Walt find a distinct brand of musical chemistry on Blunt Force Karma. It’s a chemistry that could be infectious, perhaps enough so to make a big splash in 2010.

Learn more about Year Of The Dragon at www.mysoace.com/yotd. Purchase Blunt Force Karma either on CD or digitally from Amazon.com. Digital copies are also availble from iTunes.
Posted by Wildy at 5:30 AM