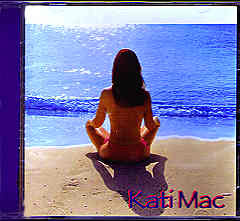 Kati Mac is a New York City songwriter who makes the rounds of the music business.  She works as a session vocalist for live talent and commercials as well as writing music for television.  Her real love is for writing and performing her own material.  The latest product of that love is Poseidon's Son, 15 tracks of poppy and poignant music.

Featuring Only Love, the new theme from CBS' The Guiding Light, Poseidon's Son is destined to be a commercial darling.  Only Love gets the full gospel treatment and sounds like a potential #1 single with the right push.  I'll admit it sounds a bit too positive to be a soap opera theme, but what can you do?  It's a tremendous song - who can blame the folks at CBS for licensing it?  Of The Center is a gorgeous melody that sounds seriously familiar in spots.  Kati Mac's voice is exuberant throughout and carries this song in a way many artists could not.

Poseidon's Son is just Kati Mac and piano, and is starkly beautiful.  Kati Mac gives it the full ballad treatment, running from soulful soprano to sensuous alto as easy as taking a breath.  Don't be surprised if this song gets licensed for some show or movie in the not too distant future.  Ditto I Keep Dreaming, a busy and soulful song full of the remorse of love lost.

Isyawitme? is a bluesy funk-disco concoction that should be a nightclub hit, and again has an extremely licensable sound.  Other highlights include the gorgeous It's Only Love, the ironic I Heard You Twice The First Time, He Loves Me He Loves Me Not, and Like I Could.  They don't end there.  At 17 tracks, Poseidon's Son is full of musical gems.  At The Edge Of The Pond is a sweet little folk number, and Freaky Deaky is another funk-laced dance tune.

Saving Grace is one of my personal favorites here, a pure country ballad with a beautiful melody that will ring in your ears long after the last musical strands of Poseidon's Son have died away.

Kati Mac has a talent for writing hooky pop songs with memorable lyrics and strong melodies that have a way of sticking in your head.  Add to this her silky, soulful voice and you have a recipe for great things.  Expect to hear many of her songs on primetime television, and expect to buy the album anyway because despite her commercial appeal, Kati Mac is a little bit deeper than your typical pop fluff.  Don't be entirely surprised if Poseidon's Son catapults Kati Mac into the national consciousness.  All she needs is the right break and this album could sell millions.

You can learn more about Kati Mac at www.katimac.com, where you can purchase a copy of Poseidon’s Son or any of her other three CDs.  You can also download single songs through her site.
Posted by Wildy at 8:05 AM