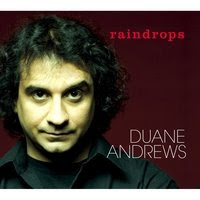 You can take someone out of Newfoundland, but Newfoundland can never be removed from the heart of a native. I heard someone use a much more scatological version of that saying on a trip to the University of Western Ontario in the early 1990's, but after meeting a few residents of that island I tend to agree. Duane Andrews seemingly proves the point on his third album, Raindrops. Andrews left Newfoundland to study jazz at St. Francis Xavier University, and went on to study composition in Paris and Marseilles, but some part of his heart has always stayed true to the music of his home. Raindrops offers us a glimpse of Newfoundland's musical traditions interpreted in the style of the great Django Reinhardt with some help from the Atlantic String Quartet.

Andrews is incredibly inventive in both song construction and in performance. If you want to know how Jigs and Reels sound with jazz treatments, check out the sublime Bees and Flowers / Joe Smallwood's Reef. Andrews covers all of the influences in the patois that makes up New Foundland's musical language, including Celtic, English, French, Spanish and Portuguese. Highlights include Bell Island, Indifference, DD's Blues and Raindrops.

Raindrops is an album for Jazz enthusiasts, Newfoundland folk music fans, and fans of great music in general. I know there are some great guitar players out there, but I would put Andrews up against any of them. Raindrops is a must-hear.

You can learn more about Duane Andrews at http://www.duaneandrews.ca/. You can purchase a copy of Raindrops at www.cdbaby.com/cd/duaneandrews3.
Posted by Wildy at 5:10 AM