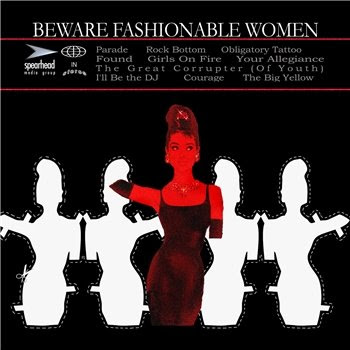 Dick Dale-style guitar runs. Beach Boys harmonies. Frenetic early-punk energy ala The Clash. A sense of humor reminiscent of The Barenaked Ladies. What's that you say? No band could encompass such divergent styles? Well folks, meet Beware Fashionable Women (BFW), who are here to prove you wrong. The Los Angeles (by way of Pittsburgh) quartet released their self-titled debut in 2008 upon an unsuspecting world.

Beware Fashionable Women are not your typical rock band. Elements of Jazz, surf-rock, Latin, and classic rock abound. What is most impressive about Beware Fashionable Women is the pure musical sense they exude on the ten songs on their debut. It wouldn't be a surprise to find out this was secretly a super group of industry veterans finally making the album they always wanted to make. It's certainly an album that music fans have been waiting to come along, even if they've never heard of Beware Fashionable Women.

Their debut starts out with Rock Bottom, which combines a surf guitar style with the urgent writing style of early punk. Oh, and don't forget the amazing harmonies BFW throw in. This is three and a half minutes of pure pop perfection. Obligatory Tattoo displays some of the sense of humor BFW displays at times, all over a Latin jazz influenced background. Girls On Fire is a frenetic tune with crunchy guitars and a catchy refrain that will be get stuck in your head.

My second favorite track is Your Allegiance. This sounds very new-wave Beatles, and is one of the catchiest tunes on the album. My favorite track follows on its heels - The Great Corruptor (Of Youth). This is like the Everly Brothers taking on a Spacehog tune. I know that's a weird description, but it's apropos. The song is killer and is worth the price of the album. Other highlights include Parade, Courage and Big Yellow. Big Yellow just adds to the eclectic melting pot that is Beware Fashionable Women, as you'll wonder which Beatle wrote it for them.

You can learn more about Beware Fashionable Women at www.myspace.com/bewarefashionablewomen, where you can purchase a copy of their self-titled debut CD.
Posted by Wildy at 3:31 PM