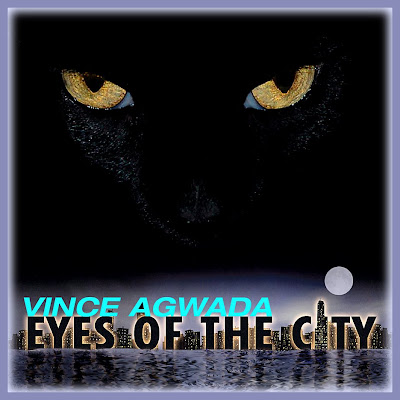 Agwada provides us with a collection of gritty blues-rock songs on his debut CD, Eyes Of The City. There's a real Chicago feel that pervades the album that is part Funk and is fueled by Agwada's masterful fretwork on the guitar. Blooze is an effort worthy of Hendrix, and rolls right into Does It Really Matter?, a big-band style piece that's pure early Rhythm and Blues. Agwada has a pleasant voice to listen to, but his guitar playing is the real star here. The man throws off riffs like thunderstorms spawn tornadoes in the summer. They come quicker than you can imagine and devastate you before you even know what hit you.

Agwada switches back and forth between the gritty Chicago Blues-Rock of the early seventies and the classic Rhythm-and Blues sound that helped create early rock and roll (and inspired an entire generation of Motown stars). I'm Coming Home is a delicious instrumental gem with smokin' hot harmonica, and the legendary Sugar Blue make a guest appearance on Rain (always a treat). Tracks such as Rain, Confidence Man, and Hard To Cry make it impossible to put this disc away. Hard To Cry sounds like a tribute to Texas school of Blues that made Stevie Ray Vaughan an icon. The title track, Eyes Of The City confused me a bit just because it seemed totally out of context with the rest of the album -- more of a slow jams vibe, but Agwada's vocals carry the song nicely.

All in all, Eyes Of The City is an outstanding effort. Agwada conducts a master class in blues guitar before our very ears. The songwriting in general is very strong, and the CD captures some of the energy you might find in a live performance. Eyes Of The City earns a strong recommendation.

You can learn more about Vince Agwada at www.vinceagwada.com. You can purchase a copy of Eyes Of The City at www.cdbaby.com/cd/vinceagwada.
Posted by Wildy at 5:45 AM