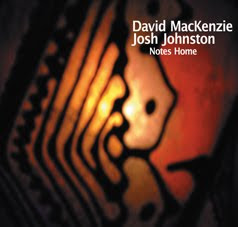 Dublin is home to David MacKenzie and Josh Johnston, but much of their writing gets done on holiday in Italy and France. Hence the title of their sophomore album, Notes Home. MacKenzie & Johnston were accomplished musicians before coming together. David MacKenzie began his professional career with the BBC Northern Ireland Radio Orchestra. He has played with various ensembles throughout Europe and has recorded with Elmer Bernstein, John Barry, U2, Shania Twain and The Corrs. Josh Johnston has recorded or performed with Roesy, Kila, Declan O'Rourke, Karl Scully and Ronan Swift, and counts The Beatles, Billy Joel, Elton John, Alan Parsons, Ben Folds and Moxy Fruvous among his influences. MacKenzie and Johnston's debut album, A Minor Happiness was a straight-forward duet of violin and piano mix originals and covers, but for Notes Homes, the duo tackles the musical world of Stephane Grappelli and Joe Venuti with thirteen original tunes that transcend the spirit of the two jazz masters.

Notes Home opens with The Latecomer, a vibrant and mildly rambunctious work that dances on the edges of Bee-Bop and Rockabilly. MacKenzie & Johnston dance around each other like a pair of prize-fighters, and when they meet musical sparks fly. Cap Mortola is a lilting tune, perfect for dancing. Things take a dark and sentimental turn on Silk, a light samba perfect for the parlor or piazza. Place Carnot perfectly present and past, with guitar and violin in perfect sync throughout. MacKenzie And Johnston take things down a notch with La Nabonnaise, one of the simpler and most stoically pretty songs on Notes Home.

Minor Happiness was not my favorite tune on the first listen through, but I have to admit it grows on you. The song is pure joy in melancholy blue with a melody that sticks with you and an arrangement that's a hair's-breadth from perfect. Broadband Blues takes another tack, with a light and airy theme that plays like a fragrant summer's evening breeze. The low point of the album, a misnomer, is Waiting. This is simple dinner jazz, perfectly executed; a musical resting place before the final stretch. Wistful Thinking leads into the highlight of the album. Point Neuf is a deliciously dizzy waltz, with the violin dancing like a dervish. Don't be surprised if Point Neuf causes you to push the replay button many times over. MacKenzie and Johnston close out with the highly danceable Sliding Scale. The piano is bedrock here, with the violin providing the fireworks.

David MacKenzie & Josh Johnston make all the right moves on Notes Home. Fans of Django Reinhart, skeptical of all of the artists out there who "sound like" Reinhardt, will be pleasantly surprised by the chemistry and musicianship on Notes Home. MacKenzie & Johnston don't try to be Reinhardt and Venuti; instead they pay tribute to their legacy, staying close enough to the masters to be in the ballpark but original enough to bring that classic sound forward into the 21st century as vibrant as it ever was. Make sure you get your Notes Home.

You can learn more about David MacKenzie and Josh Johnston at www.myspace.com/davidandjosh or http://www.davidandjosh.com/, where you can purchase a copy of Notes Home.
Posted by Wildy at 5:10 AM