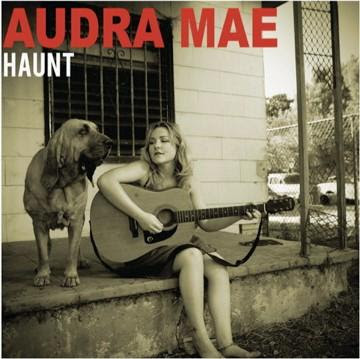 I guess if Judy Garland and Liza Minelli are in your family tree you might at least consider a career in show business. Such filial connections might get you a toe-hold in music world, but you don't go anywhere without real talent. Oklahoma native Audra Mae is one of those artists who would make it if her most famous relative was the OSU water boy. With a voice that's reminiscent of folks like Garland, Kay Starr and Mae West but with a bit of country twang thrown in, Audra Mae turns heads when she starts to sing. Audra Mae came to national attention when her cover of Bob Dylan's Forever Young was featured on FX' Sons Of Anarchy last year. She will return to the show's soundtrack this season with a cover of Patti Griffin's Mary. On October 20, 2009, Audra Mae released a digital-EP entitled Haunt, in anticipation of her full length debut due in early 2010.

Haunt opens with The River, a stark tale full of beauty. Audra Mae's voice is absolutely enchanting; time seemingly stands still the first time you hear her. The Fable has a darkly gorgeous melody lawn drawn across an arrangement that sounds like it came from a European cabaret. Audra Mae displays a lyrical depth and poetic feel for songwriting that seems well beyond her years. Eli, The Barrow Boy is a song about loss, grief and the choices it sometimes makes for us. Audra Mae writes here in the style of a bard, creating a character who lives and breathes in a cautionary tale, enlivened by her lush voice. One Silver Dollar follows the paths of life as traversed by a single coin. In truth, it's the weakest track on the EP and still a song that most songwriters would be more than proud of. Audra Mae closes out with Sullivan's Letter, in which a Civil War soldier writes home before the Battle of Bull Run. Sullivan forecasts his death, yet goes on to tell his beloved that love survives even death. The song is a tragic romance movie squeezed into a four minute bit of musical genius. The arrangement her is amazingly lush and warm, and joins with her voice in a bit of celestial harmony.

Haunt will. The songs here aren't catchy pop tunes, but good luck getting them out of your head. Audra Mae writes intelligent, deep songs that live and breathe with the characters and moments she captures within. Add to this a voice that's absolutely unforgettable and arrangements that fit each song like skin, and you have a very special listening experience on your hands. Haunt is the sort of introduction that drives curious listeners into obsessive fan hood. If this is any indication, the forthcoming debut album should be amazing.

You can learn more about Audra Mae at www.myspace.com/audramae. Haunt is available through iTunes. Hard copies can be found if you catch her on tour.
Posted by Wildy at 5:10 AM