Review: Alex Nelson - Everything You Wanted To Say But Didn't 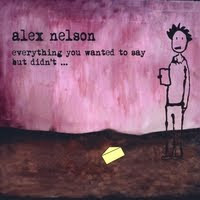 Alex Nelson - Everything You Wanted To Say But Didn't
2009, Alex Nelson Music

Alex Nelson isn't just a singer/songwriter, he's a personality. Deeply personal songs delivered with heart on sleeve and sprinkled with health doses of skepticism and wit are the order of the day for this Florida performer. Just ask anyone who has seen him live, Nelson is memorable for his songwriting but it’s the performances themselves that stick with you. Nelson doesn't just talk to the crowd, he listens and responds, turning each show into a musical conversation between old friends; full of laughter, tears and remembrance. Such a milieu is next to impossible to capture in a studio, but Nelson gives it his all on Everything You Wanted To Say But Didn't.

Everything You Wanted To Say But Didn't opens with Relaxing In Public, an interesting and intense tune about the tendency of things in life to go unexpectedly awry: "Relaxing in public and something just snapped." Nelson doesn't have a pretty voice, but it's gritty and interesting and draws in the listener. Mistake is an urgent plea to let go of a relationship. The tune and arrangement here are strong, and the song has some real radio potential. Said Too Much is angry and intense, with a sense of urgency that borders on being overdone. St Petersburg plays out as a tragic love story about a couple where his heart is committed and hers is not. The protagonist goes to bare his heart and she simply walks away. The song is well written and presented. While it dances on the edge of cliché at times, the story is well told. The downside is that it exposes Nelson's primary weakness as a singer. To judge from Everything You Wanted To Say But Didn't, Nelson appears to have two settings: quiet and loud. At the upper end, Nelson is loud and theatrical, perhaps even histrionic. At the lower end he's gritty and pleasant. The transition between the two is a leap and bound. Subtlety and nuance get lost in the shuffle. St Petersburg, unfortunately, really needs both.

It's as if a breakdown occurs here, as Nelson never fully recovers his footing. Everything else is either too big or too small. Nelson gets close to equilibrium on Wonder; the string arrangement and bare-bones approach work well, but vocally Nelson is just too much here, overpowering what is otherwise an excellent song. The final track drives the point home. Beautiful wants to match its title, but Nelson is so over the top here he chases away any aesthetic sense in the song. Nelson is practically yelling before the song is through.

Alex Nelson has a somewhat limited but interesting voice; one that can work for him. Unfortunately, whoever was at the helm for this project did Nelson no favors by letting him run wild. Everything You Wanted To Say But Didn't suffers from the lack of a subtle but firm hand at the rudder. Nelson wants to be bigger than life as a vocalist, but has yet to learn than contrast means more than pure volume. All performers learn this lesson at one point or another, but it's the producer's job to harness the energies and talents of the artist and help shape what ends up on tape (figuratively or literally). Nelson is talented, and will benefit from learning to moderate his approach. Everything You Wanted To Say But Didn't is an interesting start. We'll look to see where Alex Nelson ventures next.

You can learn more about Alex Nelson at http://www.alexnelsonmusic.com/, where you can purchase a copy of Everything You Wanted To Say But Didn’t in the Store section.
Posted by Wildy at 6:03 AM