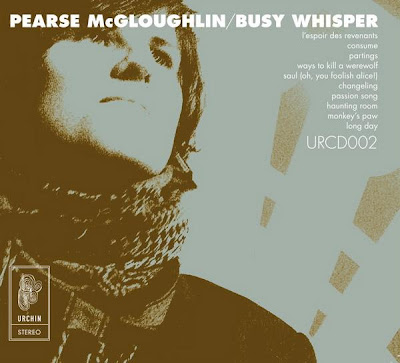 Sligo, Ireland native Pearse McGloughlin has travelled all over. He’s lived in France, Montreal and London before returning to Dublin. Along the way he basked in the various musical cultures he was exposed to. McGloughlin has played in a series of bands over the years, but steps to the fore with his debut solo album, Busy Whisper. Part Mazzy Star and part Grand Salvo, McGloughlin creates music with the essence and feel of a dream you’ve just woken from and is already starting to slip from the fingers of memory.

Busy Whisper is an album full of pitfalls with rewards strewn about; McGloughlin tends to get lost in his own ideas as often as not, but the moments of clarity are well worth the wait. Pearse McGloughlin has a very mellow sound and low key songs. Songs like Partings, Ways To Kill A Werewolf and Haunting Room play the two-sided mellow sound with good energy and McGloughlin sounds like a genius. His smooth tenor voice fits in with all of this quite well. Unfortunately, many of the songs on Busy Whisper either lack the energy he's capable of putting into a song or get tripped up in awkward lyrical turns or repetition. Ways To Kill A Werewolf is very well written; the story of a lycanthrope with moral misgivings brought on by something like love. The arrangement is strong and the story is golden. Haunting Room is in the same class; an out-of-the-box love ballad that goes dark places with glorious sound. On Long Day, McGloughlin tries to close strong with a seductively pretty melody, but the song grounds out on a low energy performance.

Busy Whisper shows Pearse McGloughlin as an artist so devoted to a particular sound that he loses his own performing sense in it. This may play out differently on-stage, but on CD the music is lifeless at times. On the songs where McGloughlin is fully engaged things work wonderfully well. Unfortunately, these are the exception rather than the rule on Busy Whisper.

You can learn more about Pearse McGloughlin at www.myspace.com/walkperson or http://www.walkperson.net/. You can buy a copy of Busy Whisper at RoadRecs.com.
Posted by Wildy at 5:41 AM