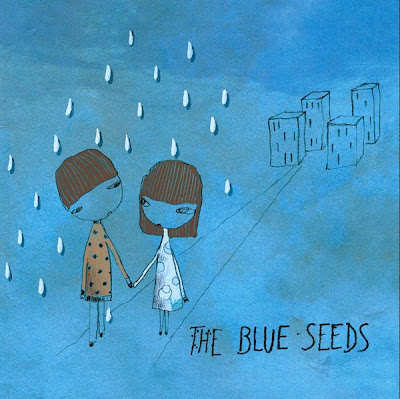 Montreal’s The Blue Seeds are led by the eclectic and mystifying voice of Amelie Laflamme who brings to life the songs of songwriter Francois Dufault. The ensemble has a highly unique and catchy sound that can be found on their debut album, The Blue Seeds. Originally released in 2008 in Canada, The Blue Seeds saw an October, 2009 release in the U.S.

The Blue Seeds open with the slinky Barcelona, a song full of longing and desire. Vocalist Amelie Laflamme has an eclectic sound that's something of a cross between Norah Jones and Hope Sandoval, and Dufault's guitar work helps to create a desperate, lost feeling that fuels the song. Outside The Rain Falls has an almost Country feel to it, played in dark minor keys. Laflamme is entrancing, filling out the sound with a voice that wiggles its way inside your brain and sets up camp for a long stay. The dark Country/Americana feel sticks around for Lost Highway, another dark and vaguely disturbing musical landscape fueled by repressed surf guitar. A Killing In Art sounds like a Mazzy Star outtake, both instrumentally and vocally.

On Lost And Delirious, Laflamme gives up her best vocal performance on the album. The song is languorous and is stretched a bit thin here but is otherwise very well done. My Fair Weather Friend takes on a gentle Blues/Rock feel, blended with the nearly ambient vocals The Blue Seeds seem comfortable with. It's a pleasant listen but doesn't really stand out. The same can be said for Black Birds, a song filled with mournful country guitar accents that get a little bogged down in its own pacing. The Blue Seeds say goodnight with the distant and disaffected I Dreamed A Little Dream, a song of emotional division and separation disguised as a hopeful tune.

The Blue Seeds have a distinctive sound that's somewhere between Mazzy Star and The Cowboy Junkies. When everything clicks The Blue Seeds sound glorious in their melancholy, but the energy level flattens out at times and the pacing of the album will lose some listeners. Laflamme has a distinctive voice that is instantly recognizable once you've heard it, and the musicianship is decidedly above average. Take The Blue Seeds for a spin and see how they fit you.