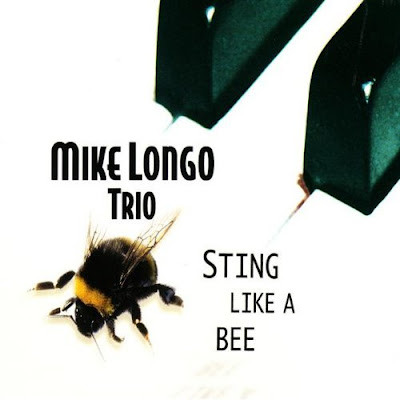 Mike Longo's resume is legendary. Longo started out playing with Cannonball Adderly on the Southern "Chitlin' Circuit" while still in high school. Over time he's taken private lessons from Oscar Peterson and played with such luminaries as Hank Garland, Coleman Hawkins, Gene Krupa, Nancy Wilson, Jimmy Witherspoon, Dizzy Gillespie, Astrud Gilberto, Lee Konitz and Buddy Rich. Longo is from the polymetric school of jazz, where different musicians might be playing different meters at the same time. This result in interesting rhythmic mixes and sounds ranging from contrapuntal to cascading rhythms that wash over the listener. Longo is a lifelong student of music, always pushing himself to learn more and delve deeper into his craft. His latest album, Sting Like A Bee, is a veritable master class in improvisational jazz. Recorded live in studio, primarily on the first take, Sting Like A Bee features very little in the way of overdubs or corrections. Like great live jazz, "mistakes" become the inspiration for great decisions, melding into the fabric of the music as if they always belonged.

Sting Like A Bee opens with a cover of Wayne Shorter's Speak No Evil, combining the active, crazy runs of modern jazz with a classic sense of melody. Longo lets his fingers dance deftly across the keys between these two schools and creates magic out of their conflicting polarities. On Love For Sale, Longo doesn't just capture the essence of Cole Porter, he channels it. Longo is subtle and guileless at the keys. Daahoud gets particularly interesting in the breakdown, with incredibly hot drum and piano work building an interesting angular sound. Longo's tribute to Leonard Bernstein, Westside Story Medley carries a distinct amount of energy and love for the work that is immediately evident.

Sting Like A Bee is full of highlights, but two tracks in particular stand out. The first is Wayne Shorter's Dance Cadaverous. This is a personal favorite song of mine, and I am probably a harsh judge on interpretations, but Longo displays the same subtlety and grace in a classic rendition that isn't a copy but stays firmly in the spirit of the original. The other highlight is Kurt Weill's Speak Low. Weill is practically his own genre, and there are tons of renditions of his songs out there from people who don't get him. Longo takes one of Weill's more nuanced compositions and nails it.

Longo shows yang and yin on the next two tracks, both of his own creation. Bird Seed is a frenetic, nearly frantic tune that's very entertaining and a bit over the top. Longo balances this out with a tribute to Wes Montgomery entitled Checked Bags. It's a complete 180; wonderfully moody bordering on blue. This is the sort of music you want when you're sitting around having a beer with friends on a warm summer night. Longo closes out with Dizzy Gillespie's Kush, a magnificent closer that is Jazz at its finest.
This may seems trite, particularly as Longo has actually known or played with many of the folks he covers on Sting Like A Bee, but Gillespie, Weill, Porter, Shorter and the rest would all be proud to be covered by Mike Longo. Longo displays an economy at the keys but knows when to let go a bit in the name of the song. That's the key, really. Longo never pushes a song to be more than what it wants to be, but he does everything to help each song be all it is. Sting Like A Bee is the finest Jazz album I've heard in 2009.

The Mike Longo Trio doesn’t appear to have a web presence, but there is a pretty significant bio out there on Jazzbeat. You can download Sting Like A Bee from Amazon.com.
Posted by Wildy at 6:07 AM