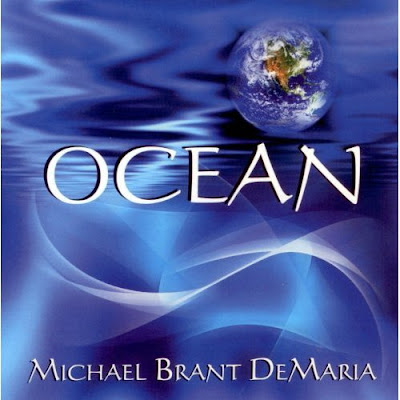 Michael Brant DeMaria returns with his latest effort, Ocean, a project that delves deep into the ambient heart of music and healing. DeMaria is a prolific and award winning composer/musician. His album Siyotanka won a Native American Music Award (NAMMY) in the Native Heart category, remaining in the top 20 of the NAR charts for six months after peaking at #1. Ocean is the second CD in the DeMaria's Healing Sound Series and is dedicated to all those impacted by the series of storms along the US Gulf Coast that culminated in Hurricane Katrina. DeMaria focuses on the use of low bass notes to achieve a deep state of relaxation while crafting gentle melodies around them.

Ocean opens with Surfacing, offering up deep bass tones representative of the deep currents of the ocean mixed with the sounds of water and fluttering musical eddies. The song is built on deep, post-melodic construction and a focus on relaxation and healing. Open Water is built around the same elements but incorporates Native American Flute. The song has a longing feel that doesn't so much resolve as wax and wane like the water itself. Moonlit Sea has a lonely beauty and placidity represented by Flute and either Synth or guitar harmonics. From a purely aesthetic perspective this is the most successful song on the album. Finding Forever lapses into a dream-like ambience, mimicking the sort of music that accompanies dream-sequences in motion pictures. This one is pretty but never really finds a stable theme.

Diving Deep uses a Glockenspiel to invoke movement, while Synth and effects build a musical wreathe about the song. Down in its heart this tune has a great deal of movement and life. The surface itself is strangely obstinate, giving little indication of the life below. Ocean is as expansive and aimless as the body of water of the same name. Ocean casts about like a leaf upon the water and ends up sounding bland. It's here that DeMaria gets stuck in a little bit of a rut, maintaining that feel through Another World, Transformation and Remember. He recovers well with In Search Of Home, a cinematic movement with an entrancing, dream-inducing feel. DeMaria drifts away with the closing track, Horizon, unraveling the bonds to now while moving forward.

Michael Brant DeMaria explores the limitless bounds of water as both a symbol and a reality on Ocean. For the most part, the album works well. DeMaria does run out of steam toward the end but recovers well to bring it home. As a whole, Ocean probes the subjects of relaxation, acceptance and healing with great success. While perhaps not quite as inspired as the award-winning Siyotanka, DeMaria has a very solid effort on his hands here.

You can learn more about Michael Brant DeMaria at http://www.ontosmusic.com/. You can purchase Ocean as either a CD or Download from Amazon.com.
Posted by Wildy at 4:59 AM