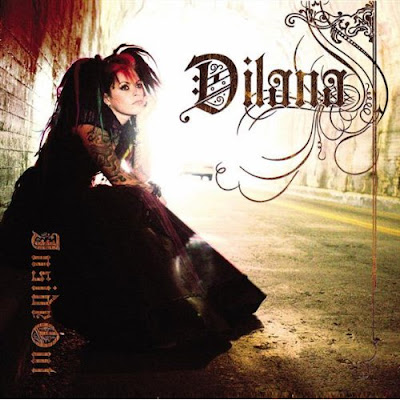 Whether you call her Dilana Robichaux, Dilana Smith or just plain Dilana, the young singer from Johannesburg, South Africa certainly gives off a dynamic air. From the wild hair and multiple piercings to a voice that recalls Janis Joplin or Melissa Etheridge at times, Dilana can certainly light up a stage. Diana’s first brush with stardom came in 2000, when her album, Wonderland, turned her into the most coveted live act in that country. Moving on to the United States, Dilana found her way to L.A., where she auditioned for the CBS show Rock Star Supernova. Dilana ended up coming in second on the show to Lukas Glazer (she should have won), and America’s next Rock goddess was born. Diana’s latest album, Inside Out, comes out November 17, 2009.

Dilana has an unusual look, presenting akin to Lydia from the wedding scene in Beetlejuice. While this will likely score some points in the Gothic demo, it's her voice that will draw the most interest. Unusually textured and dark with a hard edge, Dilana sounds like one of the Rock/Metal queens of the 1980's with a bit more range. Dilana throws down the gauntlet on the opening track, Holiday, ripping the roof off on a catchy and danceable rock tune built on a killer hook. My Drug is a big-time Alt-Rock anthem, with Dilana showing tremendous presence to a superbly written and produced track that sounds like an instant hit. Hate U!! Explores the emotional ambivalence that follows a breakup; hatred and desire mix in an explosive and highly listenable combination.

Dilana runs out of steam quickly, however, with material that turns more mundane as the album progresses. It's as if the EP that should have been is presented over the course of the first three songs with one or two bright spots the rest of the album. It's not that the rest of Inside Out is bad, it's just average. Somebody Else is a stereotypical Alt-Rock sound that's not radio worthy and not overly memorable. One exception is Ice, the most nuanced and dramatic performance on the disc. Dilana steps away from dreams of being a Rock Star or Pop Radio star on the introspective autobiography of a survivor. Dilana belts this one out with aplomb. Sold Gold is decent enough as well, returning to the big Guitar Rock sound that worked so well for her earlier, but the rest of the disc passes in relative anonymity.

Inside Out starts out impressively, showing Dilana as having a real talent for going large with a Rock anthem, but the energy and intrigue fizzle quickly after the first few songs. The rest of the disc is mediocre, although Dilana still shows flashes of the intensity and grit that team with talent to make her a potentially special performer. The difficulty here isn't the singer but the material, which doesn't really seem to fit to Dilana's personality or interest. Inside Out would make an outstanding EP, but only an average album.

You can learn more about Dilana at http://www.dilanarox.com/ or www.myspace.com/dilanarox. Inside Out drops on November 17, 2009. Expect wide availability.
Posted by Wildy at 5:10 AM

Good review. Dilana was lucky not to win Rock Star, she would have been saddled with Tommy Lee's band and they didn't do so well. He's back with Motley Crue now anyway.
Anyway, nice blog.
Anna

Not a bad review, but no mention of the two best songs on the album: World Party, which is a catchy headbanger and The Question, which reminds me of early Fleetwood Mac's song Oh Well. And yes, her first album was Wonderfool, not Wonderland. I can't help wonder if you got distracted as the album went on....

It's be nice if I could actually BUY the mp3's of the new cd. Amazon has one song missing for the full price, I am sure not installing itunes on my PC and no one else has it available. Just silly.