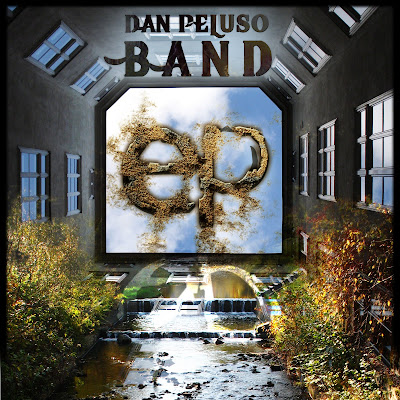 New York City expatriates the Dan Peluso Band currently make their home base in Pittsburgh, a market less cutthroat and less focused on how much edge you have. This is a boon for the Dan Peluso Band. Peluso has a knack for writing gorgeous pop songs that are part Matthew Sweet and part Brit Pop. The Dan Peluso Band's debut CD, entitled EP, was released in September, 2008. It' s the sort of pop introduction that will open eyes and ears.

EP opens with Rabbit Hole, a hopeful tune about it being darkest before dawn. A strong melody and quirky pop sensibility sell this song. Peluso's voice here isn't so much pretty as it is unique and interesting. It's instantly recognizable and is the sort of iconic sound that could make him a brand. Take Heart is an eminently spiritual if not religious anthem. The mostly acoustic arrangement and soaring chorus build the inspirational vibe here. Letter Back To You has an Alan Parsons vibe to it, and has the reluctant but strident edge of someone who's made the right decision even it's difficult.

Believe has an angry tone that is absent from the first few songs of EP. It sounds like the writer's conception of what Jesus might think about humanity post-crucifixion. It's an interesting monologue and is probably more apt than it may appear on first listen. It's a risky song, and the sort that separates a good writer from a great writer. Settle Down runs to the other end of the spectrum. It's not so much angry as it is a frustrated stream of consciousness song. It's here that the Matthew Sweet comparison really springs to life.

The Dan Peluso Band is a young band with strong songwriting chops and a slightly schizophrenic personality (as a band). That's judging from the five songs here which seem to go in very divergent directions. On Believe, Peluso shows he has the potential to be a great songwriter. If he has more tunes live Believe and Rabbit Hole up his sleeve he will be with us for a long time. For now, EP is a great introduction. Definitely worth a listen.

You can learn more about the Dan Peluso Band at http://www.danpelusoband.com/ or www.myspace.com/danpeluso. You can purchase a download of EP at iTunes or through Amazon.com. No word on whether a hard copy release will be available.