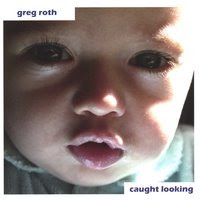 Greg Roth has quite the musical history. He's played with a number of local and regional bands in Philadelphia and Washington, D.C. He resumes includes performances in 18 states and opening for acts such as Patti Rothberg, Honky (Butthole Surfers) and Mic Harrison (Superdrag). He's even played rhythm guitar with Glenn Tillbrook. After years of supporting other acts and his band (The Jillians), Roth decided to release a solo album of material he'd accumulated over the years. Caught Looking was released in 2007 on Rio Ranch Records, and has potential to be a delightful rock record with Americana roots.

Roth's first single was Las Vegas Wedding, a jangly brit-pop inspired story song. Musically the song is quite strong but does suffer from an enunciation gap that makes it difficult to discern the lyrics. While this can be a stylistic choice (or non-choice as the case may be), in this particular instance is detracts from the song. Las Vegas Wedding becomes a good song where it might have been a great one. The music and melody are absolutely memorable with significant radio/commercial potential, but the inability to connect with the song's message nullifies much of the musical effect. Your Providence, on the other hand, is pure pop/rock gold. The metronomic bass line and country flavored guitar work make for just the right magic. While the enunciation is still less than perfect here, the music is open enough to allow for the lyrics to come through.

These highlights essentially describe Caught Looking. There are a number of musical highlights here that are lessened to one degree or another by the listener's inability to understand and therefore connect with the message. If you don't listen to lyrics then this album is a 5 of 5 must have. As it is the inability to understand Roth turns a great album, perhaps even a Desert Island one into a good but frustrating listen. It's worth it for the nuggets of pop gold it contains.

You can learn more about Greg Roth at www.myspace.com/gregroth. You can purchase a copy of Caught Looking at www.cdbaby.com/cd/gregroth.
Posted by Wildy at 5:00 AM