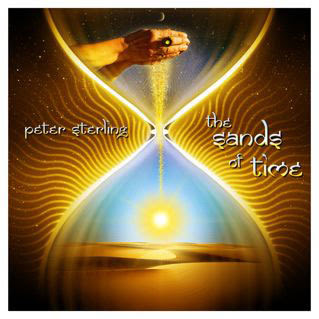 Santa Monica's Peter Sterling's story about how he came to play the harp is fantastical. Meditating in Sedona, Arizona (Red Rocks), Sterling had a vision of angels with himself among them strumming a harp. A few weeks later he acquired a Celtic harp, took one lesson and began playing. To hear Sterling's account, it's as if he were born to play the harp, with music of a divine nature flowing through him. Many years (and 7 prior albums later), Sterling released The Sands Of Time. The Sands Of Time is a collection of mellow pop/easy-listening tunes.

Forever And A Day opens The Sands Of Time, a moderately interesting piece built on a repetitive theme. 10,000 Nights is a relaxing series of harp runs that tries to appeal to a sense of melody and structure but falls short. The Mystic And The Master displays more structure and a defined sense of growth in what is arguably the class of the album. Be sure also to check out The Distant Shore, a pretty but meandering musical concoction that is a pleasant listen but lacks substance.

Peter Sterling is decent on the harp. The compositions here are loosely split between actual composition and improvisation. The Sands Of Time is pretty, pleasant listening but lacks any real substance or consistent form to differentiate it from noodling. Sterling has been known to do a lot of good for listeners, donating thousands of CDs to folks undergoing chemotherapy or recovering from other illnesses. For the general listening public, however, The Sands Of Time may leave a lot to be desired.

You can learn more about Peter Sterling at www.myspace.com/harpmagic or http://www.harpmagic.com/, where you can purchase a copy of The Sands Of Time.
Posted by Wildy at 6:21 AM

I entirely disagree with the previous person's comments. My favorite song out of this cd is titled The Mystic and the Master. The score is very soothing with its harp, chimes, cello, and violin accompiament.