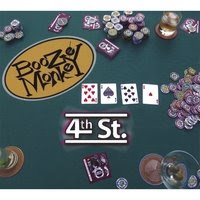 This isn’t your Uncle Fuzzy’s Booze Monkey. Booze Monkey has been rocking the Northern Virginia music scene since 2002 with their blend of acoustic and electric blues rock. Originally a duo of Blue Ajay and Joel Ludwig, Booze Monkey has undergone a number of changes. The band has grown in size and seen the (amicable) parting of founding member Ludwig. After releasing three albums and one “bootleg” in 3 years, Booze Monkey took a hiatus in 2005 keyed by Ludwig’s departure. Blue Ajay took some time to compose a movie score and stretch his musical wings.

The return to Booze Monkey was a mulligan of sorts, allowing Ajay to reimagine and expand Booze Monkey’s sound by adding electronic elements and darker shading to the music without abandoning the original spirit of the band. The end result is 4th St., Booze Monkey’s most diverse and complex recording to date. Longtime fans may take a few listens to digest the added layers and nuance that’s grown around Booze Monkey, but in the end will be quite happy with the band’s growth. Potential new fans will just need a listen to be hooked.

4th St. has a live sound that is hard to capture on a studio recording. The energy and off-the-cuff ambience is very refreshing, all the more so because Booze Monkey is good enough to pull it off without making it sound like an amateur recording. Let’s Go Monkey is the sort of happy blues jam you might hear at a party of musicans or at an open mike session that encourages jamming. Solitaire (The Old Way) is a fun bit of musical naval contemplation. The rockabilly beat and guitar work make for a devilish combination that will get your toes tapping instantly. Hope introduces listeners to Booze Monkey’s new interest in samples and Electronica. Hope has a mellow industrial sound, a walking bass line, guitar and harmonica. It sounds like Pink Floyd, Nine Inch Nails and Neil Young had a jam session.

Dick Frankenstein’s Night Out starts out with a nasty guitar riff you could hear coming from the likes of Stevie Ray Vaughan and evolves into a heavy guitar-driven rock tune. Changin’ Lanes is an enigmatic member of the 4th St. family. It opens like a ballad and becomes a fairly straightforward pop tune. Blue Ajay is in fine voice here, as throughout, but there’s distinctly familiar quality to his voice is particularly notable on Changin’ Lanes. I can almost come up with who he sounds like but not quite. My guess is it’s a composite of more than one voice with familiar qualities. This is part of Booze Monkey’s charm, to lull you in with a voice that’s pleasant and almost recognizable and then knock your socks off with music you never could have imagined.

Be sure to check out Chip & A Chair, probably my favorite song on 4th St. It builds from a slow blues guitar riff into a frantic rock tune about someone who’s luck is running out but is still holding on to hope based on what little is left. Chip & A Chair moves with an energy that is vibrant and fully representative of the fatal optimism of the narrator. Other highlights include Tellin’ You, Firewater Fetish and Voice Mail (From The Blues).

You can learn more about Booze Monkey at http://www.sanitycheck.net/, where you can purchase a copy of 4th St. You can also pick up a copy at http://cdbaby.com/cd/boozemonkey4.
Posted by Wildy at 5:00 AM

I just want to thank you for your review of my album, 4th St. I appreciate the kind words and enthusiasm.