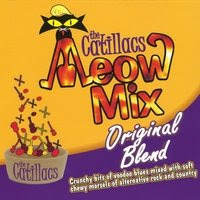 Meet The Catillacs, an Americana trio from La Center, Washington. Consisting of Richie Bean (Vocals, guitar), Susan Costa (drums) and George Burton (bass), The Catillacs are like a Super group born of the Portland music scene. Originally conceived as a rockabilly outfit, the Catillacs quickly realized that this genre limited them too much and branched out to include a full array of American roots music. In August of 2008 The Catillacs released their debut CD, Meow Mix, described as a "mixed bag" of sounds and styles including blues, country, folk, rock and rockabilly.

Meow Mix opens with Boogaloo, a Commitments style R&B jam. Boogaloo sounds like a perennial concert favorite, the sort of song that really gets a set moving. Bean is in fine voice here, and the interplay of Costa and Burton set a tight framework for Bean's classic guitar work. Soul Survivors has a Moody Blues feel to it, with lush acoustic guitar based music. Queen Of Denial is a southern-fried country rock tune that calls out someone living a lie (or a series of them). It's a great tune, very well written. The song does stretch Bean's vocals beyond what sounds comfortable for him at times however.

Ain't No Middle Ground opens with an interesting and unique acoustic guitar monologue that resolves into a remorseful country ballad. Deep Blue Sea starts from a delicious blues guitar hook and becomes an upbeat and lively blues rocker. The blues/rock material seems to be where The Catillacs excel the most, perhaps because this material seems the best fit for vocalist Bean. Whatever the reason, I found myself anxiously anticipating the blues tunes on Meow Mix.

Deep Blue Sea and Love Bank are pretty ballads but really exposes the idiosyncrasies in Bean's voice. As much as I like his voice on the blues and rock songs, the ballads can be a tough listen on the higher notes. The easiest way to describe these moments is to liken him to Neil Young. Bean is a good singer, and a great singer on the write material, but his tone on slower, higher passages can be a difficult listen. True Love Figurine moves clearly back to the blues sound that Bean and The Catillacs do so well. This tune has a bass line and boogie spirit that will mow you down if you don't get away. Bean's guitar-work here is filthy good and worth the price of the disc in its own right.

Me & The Devil Blues (Robert Johnson) is probably the best pure rock tune here, sounding like a cross between Chuck Berry and Creedence Clearwater Revival. This is blues influenced Rock N Roll at its best. On In The Fall Bean ends up truly sounding a bit like Neil Young. This song works in the context of Bean's sound and the distinct musical arrangement of the song. My personal favorite on Meow Mix is the Surf guitar antics of Hoodoo Laveaux. Dick Dale takes his hat off to The Catillacs on this one. The album closes out with Headlights, a Doors-sounding story song about a lost soul.

The Catillacs serve up a classic plate of Americana with Meow Mix. They are a tight, well-wound trio jumping the fences between rock, blues and country. Vocally, Bean it outstanding on the blues tunes. His sound does seem to become less even as he moves to the higher parts of his vocal register. This works on some songs and not so much on others. On the whole a very strong debut. Meow Mix is a fun and diverse listen, the aural picture of a band finding its feet and embarking on their great adventure. When they click they're unstoppable.

You can learn more about The Catillacs at http://www.thecatillacs.com/ or www.myspace.com/thecatillacs. You can purchase a copy of Meow Mix at www.cdbaby.com/catillacs, or you can download tracks at iTunes. The Catillacs will be touring in 2009. Get your requests in now!
Posted by Wildy at 5:10 AM