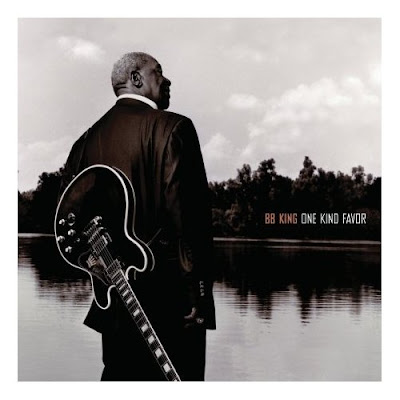 I would like to introduce you to the next Grammy winning Blues album. B.B. King's One Kind Favor is a master class in guitar-based blues/rock. The fact that the 83-year old King is still making music and touring is amazing. The fact that he may have just pulled off one of the best offerings of his career is absolutely mind-boggling. One Kind Favor clearly shows that B.B. King is still the King of Blues. Don't be surprised if aside from winning Best Blues Album at the next Grammy Awards if One Kind Favor is a competitive nominee for Best Album as well.

It's easy to gush about B.B. King. His catalogue and performance history are legendary, and One Kind Favor is vintage King. See That My Grave Is Clean is perhaps a bit morbid, but is the sort of song that keeps The Blues alive in the popular consciousness. I Get So Weary and Get These Blues Off Me are classics, and How Many More Years displays the sort of self-deprecating personal style that King has always displayed. One Kind Favor hearkens back to the early roots of Rhythm and Blues music and all that was right with the genre before it was transformed into coloratura divas trying to outrun each other.

The easy flowing Waiting For Your Call has a Ray Charles "Georgia On My Mind" feel to it and may be best written song on the album, but nothing beats B.B. King when he and Lucille get going. Other highlights include The World Gone Wrong, Blues Before Sunrise, Backwater Blues and the honky-tonk Sitting On Top Of The World. The set closes out with Tomorrow Night; even with a voice diminished by 83 years of heavy use B.B. King makes a virtuoso performance out of this that many performers would covet for themselves.

B.B. King is perhaps the last of the great Blues Masters. Each successive generation has offered up their own legends or legends to be, but no one in the genre has managed to put together the sort of resume, style and grace as a performer as B.B. King. You couldn't blame King for phoning one in at this stage in his career. Instead, B.B. King offers up a unexpected peak in a career that has crossed the map several times. One Kind Favor might just be the best album King has gifted us with. It's certainly a Wildy's World Certified Desert Island Disc, and it might just be the best album of the year.

You can learn more about B.B. King at http://www.bbking.com/. You can purchase One Kind Favor at Amazon.com or at musical retailers everywhere.
Posted by Wildy at 5:05 AM