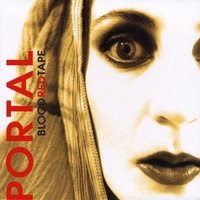 Edmonton’s Portal take a different tack in making music. Their studio is as likely to be dominated by computer towers and monitors as it is by amplifier stacks. Rosco Brooks, Kevin Hoskin, Kenton Thomas and Bill George strive for the art of creation above all other virtues on Blood Red Tape, which manages to make one of the finer melds of organic and electronic music we’ve heard this year.

Blood Red Tape rises slowly from the primordial silence into a heavy guitar/bass driven rock song called Jebel Moon. Kenton Thomas is not your typical hard rock vocalist, with a smooth sound that stands in stark contrast to the dark, crunching guitar rock. Jebel Moon relies on minor key verses to set a dark mood that resolves into major key choruses that soar without escaping the song's dark temperament. Splitzkrein will appeal to Metal and pop/rock fans alike. The guitar work here has been muted somewhat by effects or production, but the sound and energy would be at home on an early Metallica album.

Your Kettle is a highly commercial tune that builds interesting harmonics and keys around a heavy, driving guitar/bass riff. It takes over a minute for the vocals to kick in here and that's a plus. There's very interesting stuff going on underneath if you listen for it. Six Degrees is the requisite hard rock ballad. Other highlights include The Simple Things, Back In The Day and The Light.

Portal brings techno rock into the light of day with the exciting and musically challenging Blood Red Tape. The disc is highly commercial in sound and broad enough in scope to appeal to fans from outside the commercial marketing cone. Northern Canada continues to be a consistent breeding ground for original and distinctly alternative takes on popular music. Blood Red Tape is a must-hear.

You can learn more about Portal from http://www.portalband.com/. You can purchase a copy of Blood Red Tape at www.cdbaby.com/cd/portal5.