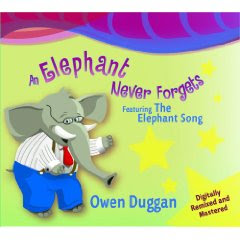 Canadian expatriate Owen Duggan makes his home in San Antonio, TX, where he is a father, an elementary school music teacher and a director of a church music program. With all of his spare time he managed in 2005 to record and independently release An Elephant Never Forgets. Mining the finest of folk and jazz traditions as well as the catalog of classic children's songs, Duggan's album won awards from Parents' Choice Foundation and National Parenting Publication Awards (NAPPA). In 2008, Duggan revisited An Elephant Never Forgets with producers R.B. Blackstone and Fred Remmert to remix and remaster the album. The end result stands on a par with releases by such children's music luminaries as Laurie Berkner, Raffi and Trout Fishing In America.

An Elephant Never Forgets is the sort of album that not only the kids will like, but the parents will get a kick out of it as well. Duggan keeps things upbeat in a folk style with sound effects and supporting vocals fitting the character(s) in the songs. Big rhymes, clear and easy melodies and fun subject matter make this a CD your kids will sing/dance along with, and you'll find some of the melodies getting stuck in your head as well. The title song is the most well known, but songs such as Farmer Joe, Tugboat Ted, The Marvelous Toy, The Biplane Evermore and At The Codfish Ball are memorable and make this a disc you and your children will listen to again and again. (And as a parent who's listened to copies of certain children's CDs to be unnamed hundreds of time I can tell you that An Elephant Never Forgets wears better than many in the genre).

Owen Duggan is a highly talented writer/arranger and instrumentalist. His voice is pleasant and clear and his manner is perfect for a children's album. You can't go wrong with this disc. Your kids will love it. You will to.

You can learn more about Owen Duggan at http://www.owenduggan.com/. You can purchase a copy of An Elephant Never Forgets at Amazon.com, or at brick and mortar outfits such as Barnes & Noble, Best Buy and Borders.
Posted by Wildy at 5:05 AM