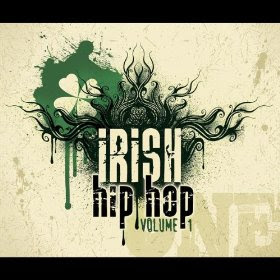 Various Artists - Irish Hip Hop, Volume 1
2008, 80 Million Records
Are you ready for the next big thing? Yes, that says Irish Hip Hop. Don't be embarrassed if you've never even considered the concept, but within the next few years you might not be able to escape it. The Irish Hip-Hop movement grew out of attempts to blend traditional Irish music with hip-hop beats. The genre has become a tour-de-force in Ireland and England; has begun to spread to the rest of Europe and even across the pond to the United States. Steeped in a respect and love of Irish culture, Irish hip-hop eschews the fake glamour and gangsterization of American hip-hop for honest representations of real life through the eyes of the artists. MC Ammunition, one of the biggest stars of Ireland's hip hop movement compiled 20 tracks for Irish Hip Hop, Volume 1, to spread Irish hip hop to the world.

The collection opens with Rira's 25 O'Clock In The Morning, a rousing party anthem (I just wanna split riffs with the gifted / hit spliffs, get blitzed and keep liftin' / No pausin', no stallin' / keep it goin' til 25 o'clock in the mornin'). This song should make a killing for Rira in dance clubs - it has mega-hit potential. Up next is CMC with Home. CMC has a rhythmic and lyrical style similar to Eminem without the extreme level of dysfunction that Mr. Mathers lives in. Rob Kelly chips in with Take A Look, an ode to the Irish everywhere.

MC Ammunition (Or Ammo) adds Irish Dreams to the mix. This is a downbeat rap tune with some 1970's style samples and a mellow rapping style. Irish Dreams conveys a love of Ammo's country that is missing from most American music (rap included). Be sure to check out Shaymin and Lassie, which samples a jig and pays homage to Shaymin's "Irish chick". The rap style here is closer to Sublime than NAS and carries a positive message about being true to the one you love. Other highlights include Redzer's Gritty City (Featuring Jambo); Project 77's Takin' On The Planet; The Informatics' Wake Up and the jazz influenced Revolutionary by Ophelia.

Irish Hip Hop Volume I is an amazing collection from left field that will shock and amaze those on the pond's West End. Irish Hip Hop seems to restore the energy and authenticity of Hip Hop/Rap music. The Irish are keeping it real, where most of the American hip hop establishment forgot what real was right around the time they bought their first bling. Songs about family, work, love and everyday life; There’s nothing more street than that. Definitely recommended.

You can learn more about Irish hip hop at www.myspace.com/irishhiphopvolume1. You can currently download Irish Hip Hop Volume 1 through Amazon.com or iTunes. No word yet on hard copy (CD) availability.
Posted by Wildy at 5:05 AM