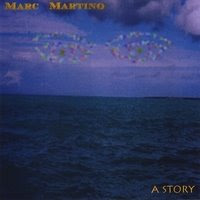 Buffalo, NY native and currentl Eastchester, NY resident Marc Martino has gone to L.A. and back in his pursuit of musical education and muse. He has spent time playing every sort of music, jamming with bands from coast to coast. This Grove School of Music graduate is also an accomplished musical engineer. 2008 sees the release of Martino's solo debut, A Story. A Story is a macro-micro effort, where the songs work together to tease out a story or theme, but each song is also a story unto itself.

Marc Martino creates using base tracks that feature either his 100-year old French piano or his modern day synth-rack. Martino builds the songs in layers from there much like a painter working in oils; Building and layering until the sonic expression is as clear as it is in his mind. This compositional style is fraught with pitfalls, and even the best composers fall into them from time to time. Martino manages to miss most of the potholes on this road however, providing a sonic journey that is both full of beauty and knocking on the door to adversity.

RainShrine is primal and eclectic. There's a Peter Gabriel feel to this song that both makes sense and diverges from rationality. Once Upon A Time has an epic feel to it; not so much like a fairy tale but like a story told about gods and mortals and the interactions between them. Calling The Storm returns to the primal feel of RainShrine; dancing on the ethereal edge of improbable age and decay while fighting for survival. Eldritch Fire is by far the emotionally darkest tune on A Story, and probably also the best composition Martino has to offer here. The slow build of a theme into a Grand Illusion/Phantom Of The Opera hybrid sound is both striking and mind-bending. While the song itself isn't melodious, it nevertheless sticks in the head like a fly in ointment. It won't go away. Other highlights include Holly, The Vale and Dim.

Marc Martino has a unique and authentic musical vision that is born of both concept and feel. It can be difficult in music to see both the forest and the trees, often one gets lost int he shadow of the other. Marc Martino has skipped them both and painted in notes the shadow, the accents of which imply both and belie neither. A Story is a ravishing success.

You can learn more about Marc Martino at www.myspace.com/marcmartino. You can purchase a copy of A Story at www.cdbaby.com/cd/marcmartino.