Review: James Morrison - Songs For You, Truths For Me 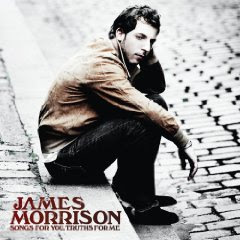 James Morrison – Songs For You, Truths For Me
2008, Polydor

James Morrison, at all of twenty-three years old, has already captured the hearts and minds of British Pop fans. With a soulful voice and a mien that belies his age, Morrison has the formula of great songwriting, a soulful delivery and substantive lyrics that make for a great listen. James Morrison’s second album, Songs For You, Truths For Me, works hard to overcome the dreaded sophomore slump. He succeeds.

Songs For You, Truths For Me opens with The Only Night, with Morrison sounding like Rod Stewart in his heyday. The Only Night has a strong Motown vibe supplemented by outstanding harmonies. Save Yourself is an upbeat pop number that would have been a major AM radio hit in the 1970’s or early 1980’s. Be sure to check out Broken Strings, my current favorite on the CD. The highly personal and confessional song strands out for a guarded delivery earthed in minimalist pop aesthetic. Morrison gives his best performance here. Oh yeah, and it’s a duet with Nelly Furtado.

Nothing Ever Hurt Like You goes back to the Motown sound that Morrison seems to do so well, sounding a bit like Stevie Wonder in the process. Morrison’s easy-going delivery is a plus here, modling himself easily to the style. Other highlights include Once When I Was Little, Fix The World Up For You and Love is Hard.

James Morrison is cutting a path in the rock world with new material that is the progeny of 1960’s R&B and its pop derivatives. The vocal similarities to a young Rod Stewart make for a familiar-yet-new sound that will ingratiate him to a lot of listeners in the adult contemporary and pop markets. Morrison is a talented songwriter whose specialty is in the lyrical flow of his songs. Songs For You, Truths For Me reflect the outgrowth of creation where artists often learn more about themselves from the process than from the finished product. To that end the album was a dual success. James Morrison should be with us for some time to come.