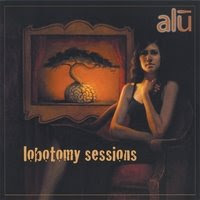 Alu may well be the most enigmatic performer in popular music. Stylistically similar to Canada's Sarah Slean, Alu is like Tori Amos without filters. Alu constructs gorgeous gothic cabaret/rock creations that are woven together by the beautiful silver and golden threads of her voice. Alu has developed a small but highly devoted following with her debut album, Infomercial Gasmask and has had songs featured in the movies Juncture and Clive Barkers The Midnight Meat Train. 2008 sees the release of Alu's 2nd album, Lobotomy Sessions. It has been a long time since an album so beautifully twisted and unique has hit the popular music scene.

Lobotomy Sessions opens with Buzzin' In My Brain, an ethereal bit of musical psychosis that is as intriguing as it is disturbing. Alu fills every note with a dark gothic charm that barely hides the wonderful madness that drives her. Casket Salesman portrays a morbidly colored relationship that is an apt parallel for willing suffocation. Circus Cosmos is Alu's ethereally expansive madness at its best and brightest; A haunting funhouse waltz in grayscale that stands in stark contrast to the lurid colors in Alu's tremulous alto.

Recluse opens with a sitar and Bedouin rhythms that meld into a gorgeous orchestral arrangement. The lost narrator in this tune is trapped within her own inner walls with no way out. The plaintive wails of her soul are the lyrics and melody set within a neo-baroque cocoon. Alu turns 180 degrees for The Metrosexuals, a jaunty cabaret piece that Nellie McKay would be proud of. Other highlights here include Black Cloud, Aahhh, and the devastatingly personal and beautiful Amy. The stilted orchestra in Martian Rendezvous is worth hearing, and Luna is a startlingly beautiful orchestral movement with lyrics.

Alu is one of a kind, combining Sarah Slean's penchant for dark, European influenced gothic themes and genius with the out of this world musical leanings of a Tori Amos. Lobotomy Sessions will be a little out in left field for some readers, but if you can suspend disbelief for just a few minutes you'll forget what a strange new world Alu offers in awe of its utter and haunting beauty. I guarantee you haven't experienced anything quite like this. A Wildy's World Certified Desert Island Disc it is. That's an understatement.

You can learn more about Alu at http://www.alumusic.com/ or www.myspace.com/alu. You can purchase a copy of Lobotomy Sessions at www.cdbaby.com/cd/alu2.
Posted by Wildy at 5:05 AM