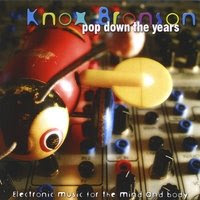 The Bay Area's Knox Bronson creates pop music by running away from pop music. Delving into influences that include 60's pop, classical, jazz, blues and electronica, Bronson creates a musical stew that is different than anything you've heard before, and yet amazingly catching and close to the heart. Bronson writes according to the philosophy that all songs already exist, reaching out into a sort of musical super conscious to bring back bit by musical bit until some pure confection is completed. In this way Bronson creates music that stirs the lifeblood the way Rock N Roll did in the 1960's; the way rap did in the 1980's. Pure creation and pure music blend together to fuel Bronson's first released album, Pop Down The Years. Bronson's muse is true to the long line of tempo-setting pop/rock bands to come out the San Francisco Bay area.

Bronson has this odd air about him that’s part Jim Morrison and part David Bowie, almost as if Ben Stein decided to sing. The result is a jarring listen as your mind tries to wrap itself around his unconventional sound. Pop Down The Years opens with Hey Little Earthgirl, an electronic ode to pop music that is quite catchy. The vocals are buried in effect and heavy synthesizer work, but the music is infectious and will have you tapping your toes. Old Man Cold Man has a stilted vocal style that isn’t monotone but suggests that sort of effect. Take Me Down has the same sort of Jim Morrison on downers affect to it. The style is interesting, but does begin to wear on the listener after a bit. Other songs of note are Bordertown, Celeste and Pop Down The Years.

Knox Bronson is unusual. His depressive Jim Morrison style vocals leave little room for middle ground. You’re either going to fall in love with this record right away or you’ll dislike it on personal terms. The rub is that whatever you think of the delivery, Bronson is a fabulous lyricist. His story-based songs are poetic and masterfully told. Unfortunately the delivery does get in the way at times. Pop Down The Years is a unique creation that should help establish Bronson with sort of folks who like(d) The Cure, Depeche Mode and any of the other semi-depressed Brit bands of the 1980’s.

You can learn more about Knox Bronson at http://www.knoxbronson.com/. You can purchase a copy of Pop Down The Years at www.cdbaby.com/cd/knoxbronson, or you can download it from iTunes.
Posted by Wildy at 5:00 AM