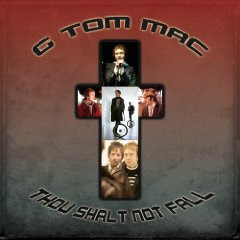 Best known for his song Cry Little Sister, the theme from the 1980's cult classic The Lost Boys, G Tom Mac has never stopped making music. Cry Little Sister was revived and recut for the remake of Lost Boys, and G Tom Mac shows that he's never stopped writing/recording his brand of wonderfully quirky guitar rock. Born with the relatively mundane name of Gerald McMann, G Tom Mac is the synonymous name for singer/songwriter McMann and his band. Coinciding with the release of Lost Boys: The Tribe, 2008 sees the release Thou Shalt Not Fall, perhaps the best work from G. Tom Mac to date.

Box Of Fantasy is an angular delight that has an other-worldly quality to it. You could probably have great philosophical debates about just which musical category it belongs in. G Tom Mac has more than just guitar up his sleeve though. Check Out the 2008 Cave Club Video Mix of Cry Little Sister, which sounds like it might have been reworked by Trent Reznor. The Conversation has a bouncy piano base that is an apt contrast to G Tom Mac's melancholy love song.

Most of the time G Tom Mac is fulfilling his eighties rock legacy. Songs like Wish You Well, You Are and All The Rage would have been thoroughly at home in the early days of MTV. Perhaps the most intriguing track on Thou Shalt Not Fall is Under Your Skin, which opens with a grand pipe organ in major chords and evolves into a raucous jangly guitar rock gem. Thou Shalt Not Fall closes out with the original recording of Cry Little Sister: a bit of musical memorabilia to remind the listener for all that has come in between, G Tom Mac is still true to himself.

Thou Shalt Not Fall is a recording of opportunity for both G Tom Mac and the listening public. For G Tom Mac its a platform to re-establish himself in the music marketplace after a period of relative obscurity. For the consumers of that same marketplace it's an opportunity to get (re-)acquainted with a talented songwriter with a quirky nature and an irrepressible ability to find that perfect hook. Thou Shalt Not Fall may not be a classic album, but it's certainly a memorable one. G Tom Mac is back.

You can learn more about G Tom Mac at http://www.gtommac.com/. You can purchase Thou Shalt Not Fall at Amazon.com or at most major music retailers.
Posted by Wildy at 5:37 AM