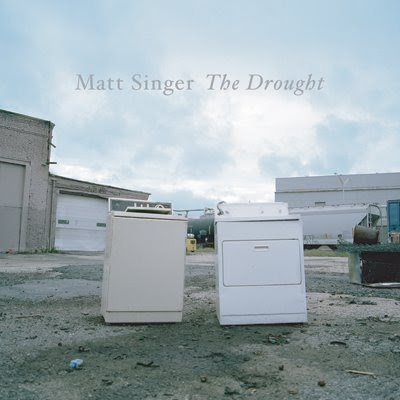 Matt Singer is a funny guy. The NYC based singer/songwriter’s first musical composition as a four year old was an ode to eating toothpaste. Singer is someone who wears his heart and soul on his sleeve. There are no filters. The Mid-Atlantic Songwriters Contest Director’s Prize winner is back in 2008 with The Drought, a collection of eclectic and oddly touching songs.

The Drought opens with The Poet, a dysfunctional, lyrically obtuse perseveration on the failings of a relationship. Matt Singer's voice is exceedingly pleasant and his low key delivery works perfectly with this material. Bird Song is a musical still life centering around a dead bird and the power of belief. The chorus to Bird Song is hauntingly beautiful, and implores the listener to open up their mind to possibilities that extend beyond that which one can see ("If you pick me up / If you would just believe / I would show you a thing up my sleeve / Believe / I Would show you a thing up my sleeve / I'd fly away".) The genius in this song is the counter-intuitive turn of events on the basis of the belief of those who witnessed the bird's "demise".
Stacy J. is a humorous story-song about the dangers of dating beautiful musicians (or ugly ones, for that matter). The song also includes an American Idol inspired subplot about getting up off the floor and trying again. Also notable are We Are Not Small and Dynamic Public Speaker. Everything We Do is a pleasant listen but it becomes difficult for the listener to discern what it's about.

Matt Singer writes to amuse himself, and that's a good thing. His perspective is delightfully warped with a strong wit and wrapped in gorgeously melodic songwriting. He's not a novelty act, but more an act who finds novelty in the mundane, similar to writers like Randy Newman or Lyle Lovett. He's a bit brash and the language at times is not for sensitive ears, but Singer is very good at what he does. The Drought is a misnomer. This is definitely worth taking the time to check out.
Rating: 3.5 Stars (Out of 5)

You can learn more about Matt Singer at http://www.matt-singer.com/. The Drought has been released but is currently only available at shows. Contact Matt Singer through his website for purchasing details.
Posted by Wildy at 5:00 AM