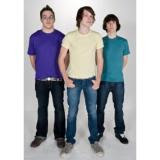 Mark Williams is all of sixteen years old, and yet has already shared a stage with such diverse talents as Les Paul, Will Lee, Phil Woods and B.B. King. This Warped Tour veteran has been playing guitar since the age of 5, and began study at the Manhattan School Of Music at ten. He is equally versed in jazz, modern rock and even Hendrix-style blues/rock. This conglomeration of styles all mixes up in his mind and results in songwriting that is modestly like all of these styles and thoroughly unlike any of them. Mark Williams is an original. His latest EP, Shallow Eyes, marks the next step in Williams' musical development. Get ready to be rocked.

Giving Up opens Shallow Eyes with a bang. Full of big hooks and a memorable melody, Giving Up carries a catchy chorus with guitar work that will remind listeners of Rush at times. Secrets chronicles a friend's drug addiction in a dark and somewhat muddled musical painting. Airwaves carries a strong pop sensibility while maintaining a hook-heavy rock and roll sound. The guitar work here is interesting, as Williams solos in every key under the sun. The solo is more dissonant than consonant and almost becomes a distraction, although if you listen to the solo on its own it's quite interesting fretwork. Squeezebox is a fairly straight forward rock ballad, full of cliché. Whisper is a strong commercial attempt with perhaps the best guitar work on the album.

Mark Williams is young. He's very talented. Like many young talents he overreaches at times in his songwriting, but the talent and enthusiasm steam off of him like steam off a volcano. Williams makes up for his inexperience with enthusiasm, but you can picture a future where the fire of youth is tempered by the wisdom and perspective of experience. When that time comes, I suspect Mark Williams will already be recognized as an outstanding songwriter and a virtuoso on guitar. For now, he is a rising young star with exceptional talent. Shallow Eyes has its uneven moments and its flashes of brilliance, often thrown up against one another. It's a fine introduction to Williams, and a benchmark that he can move forward from as he continues to grow and mature as a songwriter. Shallow Eyes is a definite must-have.

You can learn more about Mark Williams at http://www.markwilliamsmusic.com/. Shallow Eyes appears to be only available as an mp3 download. You can get it on Williams’ site, on CDFreedom or on iTunes.
Posted by Wildy at 5:05 AM