CD Review: Arden Kaywin - The Elephant In The Room 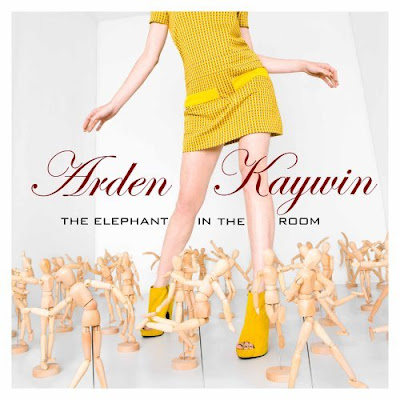 Arden Kaywin created quite a lot of buzz with her debut album, 2006's Quarter Life Crisis, earning a nomination for the song Me With Me from The Independent Music Awards for Pop Song Of The Year. She was also featured by Napster.com and has had her albums rated on critics pick lists with artists like The Dave Matthews Band and Coldplay. Kaywin is a classically trained musician (Oberlin Conservatory, Manhattan School Of Music) who blends together varying musical styles as easily as falling off a log. Her work has been featured on several television shows and she has even composed the theme for The Discovery Channel's Deliver Me. On October 21, 2008, Arden Kaywin releases her 2nd album, The Elephant In The Room. Don't say I didn't warn you, this one is going to be everywhere.

The Elephant In The Room opens with Let It Go, a wonderfully staccato pop tune that feature's Kaywin's fine vocals to full effect. Lights Out is an evocative turning of the tables on a voyeur that becomes as much of a turn on for the watched as for the watcher. The strident strumming and urgent vocals give this song an edge that belies Kaywin's good girl voice. Lights Out is a masterful pop song with significant commercial potential. So Beautiful is a pretty ballad with a layered chorus and a melancholy disposition.

Galileo is another great pop song, much more gentle than Lights Out. Galileo is cosmic thank you to all of the great minds whose ideas have helped make modern life so much easier. It's a classy pop song with a great melody that you won't be able to shake. Other highlights include Girl In A Man's World, Sleepwalking, The Way That I Am and the exquisite title track. The Elephant In The Room is wrapped in so much internal tension and angst that the song literally jumps out the speakers into your consciousness. While not the sort of song you'd expect to hear on the charts, this is the finest piece of writing on the album.
Arden Kaywin is charming and endearing throughout The Elephant In The Room. She has a pretty voice with just enough edge to make it interesting. Kaywin's songwriting is very strong and her sound is consistent. The Elephant In The Room is a strong release in the Lisa Loeb/Michelle Branch vein that should bring commercial success but also set the table for long term success. The title track is revelatory and may well be a sign of what's to come. Definitely worth a listen.

You can learn more about Arden Kaywin at http://www.ardenkaywin.com/ or www.myspace.com/ardenkaywin. The Elephant In The Room will be available October 21, 2008. You can pre-order a copy through Kaywin’s site as well as through Amazon.com.
Posted by Wildy at 5:00 AM