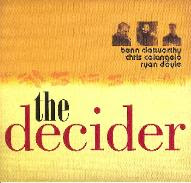 Benn Clatworthy is a Los Angeles-based saxophone impresario originally from England. He has a reputation for frantic and passionate saxophone and flute playing, and has shared a stage with the likes of Cedar Walton, Larry Gates and Lionel Hampton (among many others.) Clatworthy teams up with Chris Colangelo on bass and Ryan Doyle on drums for the delightfully melodic The Decider, a mix of alternate takes on jazz classics and some original material as well.

Clatworthy opens with John Lewis' Afternoon In Paris, giving it a Latin jazz flavor that may just improve on the original. Clatworthy starts out with a sense of economy that unravels into a coloratura waterfall of runs. Thelonius Monk's Off Minor gets similar treatment, where Clatworthy chats up the original melody before disenfranchising it in a shock and awe style sax explosion. The Decider receives similar treatment, starting out at parity with a melodic sentiment and quickly devolving into chaotic variations.

The Latin melancholy of Bossa Mia starts out as a lovely musical idea but quickly dissolves into the running off at the mouthpiece that Clatworthy favors. This trend holds up over most of the album, and in the end if comes down to what sort of jazz you're into. If you're a Miles Davis fan, or if you're a fan of newer jazz that is more concerned with technical proficiency and guitar-solo style instrumental solos, then Clatworthy is right up your alley. If your style of jazz concentrates more on melody and traditional forms, then The Decider probably isn't for you.
Rating: 2.5 Stars (Out of 5)

You can learn more about Benn Clatworthy at http://www.bennclatworthy.com/. E-mail Benn through his website to get ordering info!
Posted by Wildy at 5:00 AM